Scouting for the next Messi at the U-20 World Cup

There's a long list of players who gave notice at the U-20 World Cup before becoming household names.

Javier Saviola (2001) is the fourth Argentine, along with Maradona, Messi and Aguero, to win the U-20 Golden Ball, while Angel Di Maria starred on the 2007 Argentine team won a record sixth title. Going into the U-20 World Cup that kicks off in New Zealand on Friday (U.S. time zone), it’s no surprise that the most highly touted players include a trio young Argentines.

Angel Correa captained Argentina and scored the title-winning goal 2015 U-20 South American Championship -- after being sidelined for six months following surgery to remove a tumor near his heart. Now at Atletico Madrid, Correa debuted for San Lorenzo at age 18 and saw action during its Argentine and Copa Libertadores title-winning campaigns. Small, but skillful, quick and crafty, “Angelito” has been compared to countrymen Aguero and Carlos Tevez. 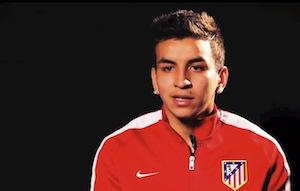 Giovanni Simeone, the son of former Argentina star and current Atletico Madrid coach Diego Simeone, was the leading scorer at the 2015 U-20 South American Championship with nine goals. A specialist at pouncing on chances in the box, he's been at River Plate since 2008 and signed a pro contract in 2011.

Emanuel Mammana is not in the Messi or Aguero mold – he’s a central defender. But the 19-year-old, who has started key games for River Plate, has already made his senior national team debut, coming on as a sub in 2-0 win over Slovenia last year.

SPEAKING OF ARGENTINES. One of the key players for the USA could be midfielder Joel Sonora, who missed the USA’s third-place finish at the U-20 Concacaf Championship with an injury but has been part of the U.S. youth national team program since 2012.

Sonora is the son of Argentine defender Diego Sonora, who won five league titles and played more than 200 games for Boca Juniors before joining Dallas in MLS’s inaugural season of 1996.

Joel was born in Texas in 1996 and moved to Argentina after Diego ended his MLS career, which included a stint with the MetroStars and a 1999 MLS Cup title with D.C. United, in 2001. Joel joined Boca Juniors academy in 2011 and in 2013 was part of the U.S. team that failed to qualify for the U-17 World Cup. 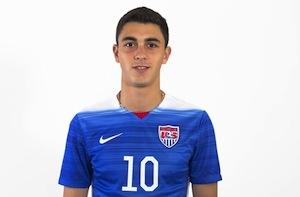 “It was a big disappointment at the time because we were all expecting to qualify,” said Sonora of the U-17s. “We didn’t see it as too difficult, and maybe we let our guard down. It was a very hard hit to take because it was the first time a [U.S.] U-17 team didn’t qualify for a World Cup. We were crushed. So we’re excited that we’ve now given ourselves another chance to show what we can do and what this group of players and this team is about in New Zealand.”

Also on that U-17 team were current U-20 World Cup players Jeff Caldwell, Conor Donovan, Rubio Rubin, John Requejo and Shaq Moore. The team was coached by Richie Williams, who was teammate of Diego Sonora’s at D.C. United.

MEXICO’s GREAT HOPE. Hirving Lozano was the co-leading scorer, with five goals, at the U-20 Concacaf Championship that Mexico won. “El Chucky” has been starter for Pachuca for more than a year, helping Los Tuzos to a runner-up finish in the Clausura 2014 and a run to the semifinals in the Apertura 2015. His stats in Mexico’s top flight: 51 games, 40 starts, 9 goals. PSV Eindhoven has reportedly made a $7 million bid for Lozano.

MAN CITY’s SUPER EAGLE. Nigeria’s Kelechi Iheanacho was the Golden Ball winner at the 2013 U-17 World Cup that Nigeria won with a 3-0 win over Mexico in the final. The 18-year-old Iheanacho is expected to graduate from Manchester City’s U-21s to the first team next season.

GERMANY’s MAIN MAN. The defending senior World Cup champion, Germany, has won the U-20 title once, in 1981, when it was West Germany. It failed to qualify in 2013 but reached New Zealand as European champion. Its most experienced player is winger Julian Brandt, who has six goals -- including a strike against Bayern Munich on his 19th birthday -- and five assists for Bayer Levekusen. Bayern is just one of the clubs reportedly interested in Brandt, who’s been valued on the transfer market at $6 million.