As a goalkeeper, Lincoln Phillips should not feature among my most cherished soccer memories. I have little time for goalkeeping escapades. But there he is, the begetter of a wonderful moment that is as clear -- and every bit as delightful -- as it was when it happened 40 years ago.

Actually, this was not the goalkeeping Phillips. This was Phillips the coach at Howard University. This was in Miami, the night before the 1971 NCAA Division I final, to be played in the Orange Bowl. A nice occasion, all final-four teams present, all smartly dressed, everyone on his best behavior. The semifinals had been played. Howard had beaten Harvard, St. Louis -- the “Billikens” -- had beaten San Francisco.

Tomorrow it would be Howard vs. St Louis. Phillips was making his speech, radiating charm with his melodious voice, his soft Trinidad accent and his fetching smile. He praised the St. Louis players and their veteran coach Harry Keough. He paused for a moment, then looked impishly over to the St. Louis table and added, “For tomorrow, I want to wish you the worst game you’ve ever played.”

Hilarity all around. No one took offense at that superb throw-away line, perfectly timed, beautifully delivered. The day after, the Billikens did not have their worst-ever game. They rarely looked bad anyway, consistency was their forte. But Howard was better on this day, taking the trophy with a 3-2 win. The first time an all-black university had ever won a major NCAA title.

All of this came rushing back to me as I read Lincoln Phillips’ autobiography “Rising Above and Beyond the Crossbar” -- despite the fact that, incredibly, Phillips doesn’t include that incident. The book is a terrific read anyway, beginning with irresistible stories of the young Lincoln’s boyhood in St. James, Trinidad. Not all of them soccer related, by no means. There’s some track & field, there’s some cricket, but above all there’s life and humanity and warmth and humor. 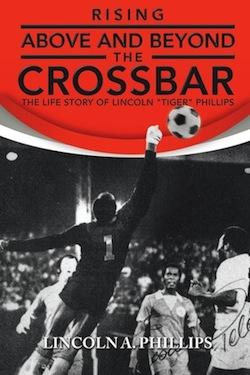 I was constantly reminded of one of my all-time favorite novels, V.S. Naipaul’s “A House for Mr. Biswas.” How about the time Lincoln and his brother Wilbert decided to give their mother a present -- a flourishing flower bed to match that of their neighbor Mr. Clifford. The bed was dug, the sole raked, manure and water applied. Now for the flowers. A midnight raid on Mr. Clifford’s beds solved that, and a riotously colorful floral display of gerberas greeted Mammy the following morning.

Nice try. But Mammy knew at once. “Take them back,” she ordered. And when night fell, Lincoln and Wilbert set out to “reverse Operation Gerbera.” The following morning, they heard their neighbor’s maid calling out, “Mr. Clifford, the plants come back.”

A lovely tale, I can see those mischievous well-meaning boys, and I can see and maybe smell those bright little plants -- even though I haven’t a clue what a gerbera is. I think “mischievous” is a good word for Lincoln -- for a start that captivating grin of his always carried a suggestion of mischief with it.

Phillips came to the USA, he played for the Baltimore Bays in the early days of the old North American Soccer League, became player/coach for the semipro Washington Darts. In 1970 he became the not-too-well paid soccer coach at Howard University.

There was already a soccer team at Howard, but enthusiasm for, and knowledge of, the sport among the athletic officials was lacking. Phillips knew what he wanted. He knew he could get better players from Trinidad or elsewhere in the Caribbean. His charm, his mischievous grin persuaded all. Having convinced Howard to award their first-ever scholarships for soccer, he brought in players from Trinidad and Jamaica and Africa. In just two years, Howard, the black university, was winning that unique NCAA trophy. When the NCAA published its 1972 soccer guide, the cover-boy was Howard’s star forward, Keith Aqui.

Phillips has plenty to tell of that championship team, its characters, its games, its triumph. But there is an undercurrent that Phillips handles well: racism. The early 1970s were turbulent times on that front. Black Power was making itself felt. On campus, the soccer championship was greeted with huge satisfaction.

Then the problems began. They revolved around cover-boy Aqui. He was 25 years old. He had not been recruited by Phillips. He was already at Howard, studying psychology, and he joined the team. Phillips’ says of him: “The guy was opinionated, and Gawd, could he grumble. But he could also play.” As a super-fast, slick goalscorer, Aqui attracted attention. From opposing players and coaches and -- eventually -- from NCAA investigators.

In the fall of 1972, an NCAA investigator appeared on the Howard campus. He was interested in Aqui, asking many questions about how much soccer Aqui had played before arriving at Howard. It was quickly established that there was no professional soccer in Trinidad, but that was not what mattered. There was an NCAA rule that said that for every year of organized soccer played overseas, one year of college eligibility was canceled. Aqui had certainly broken that rule.

To Phillips and his players and to Howard University, the moves -- by the overwhelmingly white NCAA -- smacked of racism. Admittedly, I never got around to that viewpoint, but I found the investigation not to my liking for three other reasons: first, it appeared that there were clauses in the NCAA rule book that were rarely activated, and that no one really understood; second, I definitely had the opinion that the NCAA decision, if not anti-black, was certainly anti-foreign; third, from a strictly soccer point of view, I felt that the college game, already stagnating, needed the invigoration that Howard was bringing. Yes, I did want Howard to come out on top.

NCAA charges were made against other Howard players with regard to their grades. This again had a discriminatory flavor, as no one seemed certain how to assess foreign high-school grades. The 1972 Howard team lost five of its starters, but it still reached the final four. There to lose in the semifinal, inevitably to St Louis. Phillips made another banquet speech, a rather different one, somberly, quietly, telling us that Howard’s hardest opponent that season had been the NCAA. He accused the NCAA of racism. He declared that St Louis had not beaten Howard -- “They beat the remnants of Howard.”

A daring speech, another mischief-making moment, applauded by all. A short time later, the NCAA stripped Howard of the 1971 title. The trophy was returned to the NCAA who tried to get St. Louis to accept it. The thoroughly honorable and decent Harry Keough refused. The trophy, I assume, gathers dust at NCAA headquarters.

Phillips was undaunted. He quickly built another Howard powerhouse team -- this time paying plenty of attention to the players’ eligibility. In 1974, Howard won the Division I title, beating -- who else? -- St Louis, in the fourth overtime period.

“For the second time we’d become the first African-American college to win an NCAA championship. Truth, I tell you. Truth. Nothing but the the truth.”

Phillips ponders “I sometimes wonder if I was negligent in checking player eligibility ...” Oh Lincoln, of course you were. But was any other coach doing any better? While you were doing, on your own, just about everything necessary to run the team?

Negligence there was, but the NCAA rules took a lot of tracking down and pinning down. When I finally got around to understanding them (well, I thought I did), they didn’t seem racist to me. It was their application that looked biased, unfair, that was what gave substance to the charges of racism. Phillips quotes then Davis & Elkins coach Fred Schmalz: “In a word, I thought it would have been overlooked if it was not a black institution. They were still the best team in the country.”

The wonder is that Phillips does not seem to harbor any bitterness over Howard’s treatment. You might think that’s because he had become accustomed to racist attitudes in 1970s America. Possibly -- he has plenty of tales to tell that involve him and his team.

But the overall spirit of this book is a cheerful one. That is the sort of guy Phillips is, treating both of Kipling’s famous “impostors,” triumph and disaster, just the same.

His time at Howard came to an end in 1980 after 10 years, and a 116-19 won-lost record. It did not end amicably. And Howard has long not been a soccer power. For a while he moved back to Trinidad. Jack Warner hinted that he would get the national team job, but that was not what Phillips wanted. He worked as an advisor, found Warner a tricky man to deal with, a trusted ally one minute, a dangerous opponent the next.

There were hard times. During one of these spells, he took a job as a high school coach in Maryland. “Do you know that this team hasn’t won a game in three years?” the A.D. asked him -- after he’d signed on. “Yes,” lied Phillips. This was unwelcome news, but “I just really needed the work.” Aided by some decidedly odd tactics on the field (conceived by Phillips) the team won eight games the next season.

There was the Lincoln Phillips Soccer School, which lasted for 20 years, and another turn at coaching college soccer with Virginia Commonwealth University.

Phillips also had a short spell with the U.S. national team coaching staff before the 1994 World Cup. Bora was the coach and he “wanted to go outside the U.S. to hire assistant coaches, but the USSF insisted that the American coaches were good enough ‘Hire them’ ordered the Federation.” (Now there’s something Herr Klinsmann should know about). So Phillips got hired, and worked with Tony Meola. A happy couple it seems. Phillips quotes Bora as saying “I don’t know what it is with you and Meola. When you are not here . . . hmmmmmm.” Bora made a sign meaning just so-so. “But when you are here -- Mamma mia!”

And so it goes. Even surgery to give Phillips two new knees does not seem to have slowed him down. He’s back with college soccer, an assistant coach at Loyola University Maryland’s women’s team.

There’s not much in the soccer world that Phillips hasn’t been involved in -- and all that while he was a family man bringing up four young sons.

“Rising Above and Beyond the Crossbar” brings a voice we haven’t heard before -- a voice giving the black soccer perspective of a very troubled time in the USA, what it was like to be there trying to ensure that black players would be welcomed into the American soccer pattern.

Rising Above and Beyond the Crossbar by Lincoln Phillips (AuthorHouse LLC, 2014) 212 pages.