The students at Union Grove High School in Wisconsin will get to see their teacher on TV this summer -- in a quite different capacity than instructing Spanish.

Margaret Domka is the USA’s representative on the center referee corps at the Women’s World Cup that kicks off this weekend in Canada.

Both her careers, Spanish teacher and referee, were spurred in childhood.

“I had always been really impressed with people who can speak more than one language,” the 35-year-old told us in an interview early last month. “As a kid, I thought that was really cool. So I pursued learning a language myself and decided I wanted to teach others how to do it, too.”

Refereeing started as a way to earn some cash when she was 13.

“When I started out referee, it was really as a summer of job and I didn’t have a lot of desire really to make it anything more,” says Domka.

Reffing fit in well with her soccer-playing. Domka, who would earn All-America honors at Wisconsin-Stevens Point in 2000, could pick games and tournaments that complemented her playing schedule. 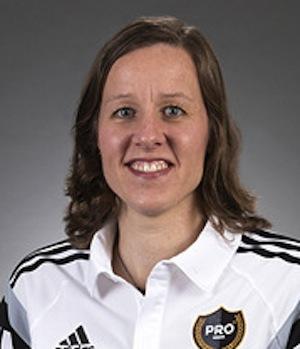 “It helped me get as much time on the field as possible, which I think is a good thing for a player,” she says. “To have as much experience in the game as possible.”

When she was about 18, she refereed at a regional championship tournament and, “It was the first time I saw the big picture of what refereeing could become.”

She became a FIFA assistant referee in 2007 and a FIFA center referee in 2009. She has reffed college ball and in the WPS and the NWSL (including the 2014 final), and in the NASL, the second division of men’s pro soccer in the USA.

“I felt the players respected me as a referee,” she said of reffing men. “They acknowledged that I was on the field as an athlete and a referee. And so I felt that I was treated as any other referee would have been.”

Some 40 percent of youth referees quit after their first year, mainly citing abuse from the sidelines, but Domka persevered, despite getting yelled at from the get-go. During one of her first games, after a 6-year-old stumbled and started crying, his mom came on the field and screamed at Domka.

“Certainly being yelled at by spectators and parents was difficult,” Domka says. “But even though I only saw it as a summer job I still had some desire in me to see what the best I could do was on the field.

“I’m a competitive person, with that inner drive to be the best that I can be. To believe in myself even if other people don’t believe in me.”

Crucial to Domka’s success were her mentors.

“Mentoring was incredibly important,” she says. “It was the reason that I continued my referee career. I had several mentors who were influential but particularly when I was in high school and doing this as a summer job, I had a mentor who really pulled me along: Randy Davis.

“He kept telling me I had potential, and kept getting me involved in tournaments. He was constantly there to support me.”

Domka reffed at the 2014 U-20 Women’s World Cup, including the third-place game at the Canada-hosted tournament. Seeing the world is a big part of what she enjoys about reffing.

“It has been incredible to have a chance to travel all over the world and meet people,” says Domka, who has reffed in China, Central and South America. “I have friends in many parts of the world and it’s exciting to build those relationship and to see so much more of the world than I might see otherwise.”

Her Spanish fluency has also helped her in her second career.

“It does help at times,” she says. “Of course, I communicate with more players. But even more so, it helps within the referee group. All FIFA referees are required to speak English, but it is still really nice to have communication in one’s native language as well, so being able to speak to people who speak Spanish is a benefit.”

At the eve of the tournament, Domka and the crew underwent a variety of fitness sessions, video analysis sessions, mental preparation sessions -- “to make sure all the referees are on the same page.”

Now she awaits her first assignment on the biggest stage of women’s soccer.