When Rubio Rubin was very young, growing up in Oregon, and didn’t have a game himself, he’d show at his older brother Bryan's Westside Metros games and hang out on the bench.

“One day, when he was 10, he came to our game with a medal around his neck from a tournament,” said Stan Baker, who was Bryan’s U-12 team. “He showed us the medal and said, ‘We’re champions of the world!’”

Now 19, Rubio Rubin really is playing for a world championship. His goal against Colombia in a 1-0 round of 16 win sent the USA into a quarterfinal clash with Serbia at the U-20 World Cup (Sunday, 12:30 am ET, Saturday 9:30 p.m. PT; FOX Sports 1, Telemundo). Rubin also scored and helped set up a goal in a 4-0 win over host New Zealand, and assisted on Emerson Hyndman’s gamewinner in a 2-1 win over Myanmar. 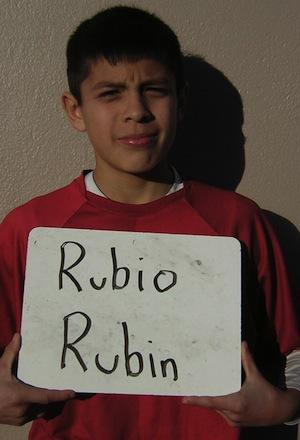 Rubin also played for the state ODP team coached by Stan Baker and was called into the U-14 national team, with two Oregon ODP teammates, coached at the time by Manny Schellscheidt.

“What stands out about Rubio was his work ethic, how he just loved the game, and how he was willing to listen and learn,” said Baker. “We pushed the kids to practice at home -- like kicking the ball against the wall, playing without coaches. And I know Rubin did that. He also played in the park with his brother and older kids.”

Konstin said Rubin, who spent time U.S. U-17 Residency Program in Bradenton, Fla., jumped at any chance to play, often guest-playing for the club’s older teams.

“He was a 24/7 soccer kid,” said Konstin. “And like in a lot of Latino families, he grew up playing with brothers, cousins, uncles. ... And he’d join us for any tournament or game we wanted to drag him to -- always happy and with a smile.”

“Diving headers, toe-pokes, chesting the ball in -- he scored anyway possible,” said Konstin. “And he had such a great attitude. When he got fouled, which happened a lot because teams knew they had to shut him down, he just got up with a smile and responded by figuring out a way to score.”

His early success as a pro didn’t surprise Baker.

“He’s emotionally composed, never out of control,” said Baker, “but with an intense inner drive and will to win. He studied the game, watching a lot of soccer on TV. A very intelligent player with quickness and a nose for goal.”

It’s that nose for the goal that got the USA a third win at a U-20 World Cup for only the third time in 14 appearances.

“I wish I could tell you I was impressed by Rubio tonight, but I’m really not because I know he’s that kind of player,” U.S. U-20 coach Tab Ramos said after the win over Colombia. “I said to him before, coming into the game tonight, that he needs to be one of those No. 9s that people talk about when this tournament’s over. And I think today he took a big step toward that.”