Mickey Kydes is the founder and president of Beachside of Connecticut Soccer Club, which celebrated its 20th anniversary last year. Beachside SC, whose boys teams compete in the U.S. Soccer Development Academy, is also a New York City FC affiliate.

SOCCER AMERICA: When and why did you start coaching?

MICKEY KYDES: As a professional soccer player in the 1980s and 90s we had to do a lot of personal appearances to promote the sport of soccer. I did many youth soccer appearances and really enjoyed working with the children.

SA: What do you enjoy most about coaching?

MICKEY KYDES: I love seeing all the young people grow from a personal perspective through the sport of soccer.

SA: What do you enjoy least about coaching?

MICKEY KYDES: Players who are not actually committed to soccer.

SA: What’s the most amusing thing you’ve witnessed while coaching?

MICKEY KYDES: I was on the sideline observing one of my coaches and he wasn't very happy because his team was being dominated. I realized that they only had 10 players on the field and that was the big difference.

I went over and asked him if everything was OK? Long story short, he added a player and our team played much better.

SA: Who was your most influential coach?

MICKEY KYDES: My college coach at Long Island University, Arnold Ramirez. He allowed me to just play and didn't micromanage, he trusted me and my teammates. 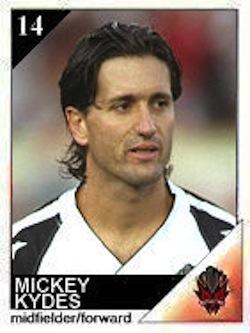 MICKEY KYDES: Priming your team for training, and letting them know what to expect from a training session.

MICKEY KYDES: I avoid long training sessions. Practice sessions should not drag on as the longer they go the more ineffective they become.

MICKEY KYDES: I think the biggest mistake is not focusing on and promoting skill development at all ages.

SA: What was the highlight of your playing career?

MICKEY KYDES: Playing as a pro [for the MetroStars] at Giants Stadium. I grew up going to New York Cosmos games at Giants Stadium with my Dad watching players like Pele and Franz Beckenbauer, dreaming of playing there one day. 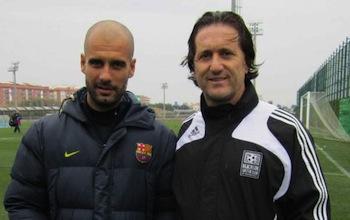 SA: What were your favorite teams growing up and which teams do you enjoy watching now? Why?

MICKEY KYDES: Growing up my favorite teams were the Cosmos and Napoli (with Diego Maradona). Now though, and for the past eight years I have really enjoyed FC Barcelona as they have completely changed changed soccer in the world. My coaching philosophy revolves around a lot of what FC Barcelona does in its youth academy. I don’t understand why more people don't adopt their philosophy and concepts.

SA: What’s your advice for coaches at the youngest ages?

MICKEY KYDES: Coaches should create an environment where the players love the ball. They need to be patient, set high expectations for their players, and trust them.

MICKEY KYDES: There is a lot, but for starters we need to promote and trust players who are different from a technical and tactical standpoint. We need to allow these players to express themselves. As a country, we will never develop a world class player if we continue to over-coach and think that is the difference. We can't have coaches be scared and feel threatened by technically and tactically sound players. These ideas need to start in Zone 1 [ages 6-12].