The Women's World Cup's round of 16 begins Saturday with a matchup of longtime European powers Germany and Sweden. Another European clash -- Norway-England -- already has the tabloids in a tizzy, while Cameroon and Colombia, the surprises of the tournament, look to make more history.

JUNE 20 (in Ottawa)
Germany vs. Sweden. This will likely be the last time Silvia Neid and Pia Sundhage face each other. Neid has already announced plans to step aside and let Steffi Jones take over as German coach. Sundhage intimated she'll also move on after coaching Sweden for the last three years.

As players, they were on opposite sides at the 1991 and 1995 Women's World Cups, where Sundhage's Sweden won both times. As coaches, Sundhage and Neid met the semifinals of Euro 2013 in Sweden, where Germany prevailed, 1-0, en route to a sixth consecutive European title. Their most recent meetings came at the 2015 Algarve Cup, where they split, Sweden winning, 4-2, in the opening game and Germany taking the third-place game, 2-1.

The Swedes only managed three ties in three game in Group D and advanced as the fourth best of the third-place teams. Germany coasted through the first round, winning 10-0 and 4-0 against longshots Ivory Coast and Thailand and tying 1-1 against Norway in a rematch of the Euro 2013 final.

For the winner, the road to Vancouver will only get tougher with possible matchups against France in the quarterfinals and the USA in the semifinals.


JUNE 20 (in Edmonton)
China vs. Cameroon. A quarter century after the Lions Indomptables made history when they beat Colombia, 2-1, to become the first African team to win a game in the knockout stage of the World Cup, their female counterparts, the Lionnes Indomptables, get their chance.

Cameroon has been the surprise of the tournament. It looked like the 6-0 win over Ecuador was nothing special when Switzerland beat Ecuador, 10-1, but in the game that followed the Lionnes lost narrowly to defending champion Japan, 2-1. The first two results all but sealed a berth in the round of 16, but Cameroon went out and claimed second place in Group C with a 2-1 win over Switzerland.

"We want to continue to create surprises," said Gabrielle Onguene, who had a goal and an assist against Switzerland.

The Lionnes will become the first Africa team to win a game in the knockout stage of the Women's World Cup if they beat China.


JUNE 21 (in Moncton)
Brazil vs. Australia. Australia goes into Saturday's match as the underdog against Brazil, the only team to win all three group matches by shutouts. But that's exactly where the Matildas like to be.

Few observers gave Australia a chance in the Group of Death, but it dominated the USA for the much of the first half of the opener before falling, 3-1, and clipped the wings of Nigeria's Super Falcons with a 2-0 win that set the Matildas up to move into the second round thanks to a 1-1 tie against Sweden.

“We’re always the underdog," Australia forward Michelle Heyman  said. "I think that’s an Aussie thing, It’s just the way we are. It’s our culture and we enjoy it and take it on. I think it’s going to work in our favor.”

JUNE 21 (in Montreal)
France-South Korea. The French put their feuding behind them -- star Louisa Necib was subbed in the 2-0 loss to Colombia after getting into an argument with teammate Jessica Houara and then dropped for the third game -- to crush Mexico, 5-0, in their third game and win Group F. The Bleues served notice that they remain one of the favorites with a devastating combination of Elodie Thomis and Amel Majri on the wings.

Americans will remember Thomis from her work on the right wing in France's 2-0 win over the USA in February. She was dropped for the Colombia game but needed only 37 seconds to set up the first goal against Mexico. She also assisted on Eugenie Le Sommer's third goal and his the crossbar herself.

The Tunisian-born Majri, who started in place of her Lyon teammate Necib against Mexico, had an excellent game in just her eighth international appearance.


JUNE 21 (in Vancouver)
Canada vs. Switzerland. The USA and Canada entered the Women's World Cup with veteran teams, but their top players have been a pair of newcomers, both defenders.

Julie Johnston, who wasn't even on the U.S. roster for Concacaf qualifying, has been dominant at center back in place of longtime captain Christie Rampone. Canada's best player at the Women's World Cup has been 19-year-old Kadeisha Buchanan out of West Virginia University.

While Johnston wasn't even a starter for the USA until March, Buchanan has been a starter for Canada for two years. In a friendly against the USA in May 2014, she scored her first goal for Canada and in the words of her coach, John Herdman, "owned Abby Wambach again."

Herdman says Buchanan has embraced the Women's World Cup at which Canada is unbeaten after three games but managed to score just two goals.

“She defends well," he said. "She attacks well. She rose to the challenge. I think some people were asking the questions whether, as a youngster, she could step up on the big stage and she’s answered the critics. She’s certainly been a rock for us back there. One goal against in three games, that’s nothing to scoff at.”

JUNE 22 (in Ottawa)
Norway-England. Do you think the Norwegian press takes the Women's World Cup seriously? VG Sporten kicked off the tabloid wars Thursday morning with a question for the English, "Are you girls ready for a hell of a beating?" 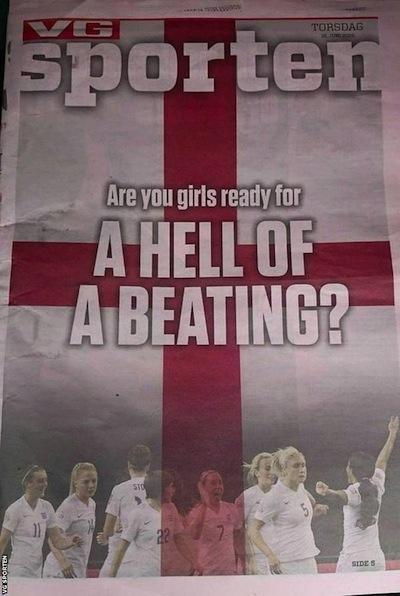 Norway will be favored, but recent results have gone England's way. The Three Lionesses are unbeaten in four games against Norway in the last decade -- three wins and one tie -- after going winless in 11 games -- 10 losses and one tie -- in a series that dates back to 1981.

JUNE 22 (in Edmonton)
USA vs. Colombia. To say that the USA has an easy road to the semifinals -- and an easier match against Colombia in the round of 16 than it faced in the group stage -- has not sat well with Felipe Taborda's "Las Chicas Superpoderosas." After all, they pulled the biggest upset of the World Cup when they beat France, 2-0, in their second game.

The Cafeteras benefited from some ridiculous calls in their first two games in Moncton -- a winning goal for Mexico late in their 1-1 tie was called off for a mystery foul and an obvious handball on Daniele Montoya with France trailing 1-0 was missed in the second half of their 2-0 win -- but their good fortune ran out as goalkeeper Sandra Sepulveda picked up her second yellow card of the tournament against England and will be suspended for Monday's game against the USA.

Sepulveda has been a big factor in Colombia's defensive strength -- it has allowed just five goals in 10 games in qualifying and at the finals -- but it has also gotten strong play out of Yoreli Rincon and Lady Andrade. The latter is only 23 and one of the revelations of the Women's World Cup with the winning goal against France and the late goal against England in the 2-1 loss on Wednesday.

“I’m called Spielberg as a coach," he said before the defending champions' second match of the group stage against Cameroon, "but I like to see results as well."

Japan's run to the 2011 Women's World Cup title was worthy of a Hollywood movie, but so far at Canada 2015 it's been all about results, three wins by the slimmest of margins against three teams making their World Cup debuts: 1-0 over Switzerland, 2-1 over Cameroon and 1-0 over Ecuador, a team that had lost its first two games by a margin of 16-1.

The defending champions will play their fourth straight debutant when they close out the round of 16 on Tuesday night in Vancouver against the Oranje Leeuwinnen, the Orange Lionesses of the Netherlands.