New York City FC did not give a good impression for Frank Lampard and Andrea Pirlo, both in the crowd of 48,047 at Yankee Stadium for Sunday's Hudson River Derby, as the New York Red Bulls blitzed the hosts in the second half. Like NYCFC's Jason Kreis, Seattle coach Sigi Schmid was disappointed in the effort of his players in their loss to Portland.

1. Kreis: 'We didn't get a real honest effort out of all of our players'

Kreis said he's seen it time and again in his years in MLS. A team gets on a run, and its players suddenly think they are world-beaters. Forget the fact New York City FC won just one of its first 13 games, it was feeling pretty good about itself, having won three games into a row going into much-anticipated derby with the New York Red Bulls.

Things were even looking pretty in the first half on Sunday. Then came the second half.

Leading 1-0 at the half, NYCFC was down 2-1 by the 52nd minute and it could have been worse. The Red Bulls went on to win, 3-1, for their second win over NYCFC this season.

"We got away from everything what we've been trying to do over the past several weeks and months," said Kreis. "It was an effort that was really disappointing. From my point of view, it was the first time I felt like we didn't get a real honest effort out of all of our players."

What made the performance so disappointing was the game drew a crowd of 48,047 at Yankee Stadium that included Frank Lampard, who will start training with NYCFC on Wednesday, and Andrea Pirlo, who is expected to sign with the team this week. Also in attendance was Real Madrid star Gareth Bale. 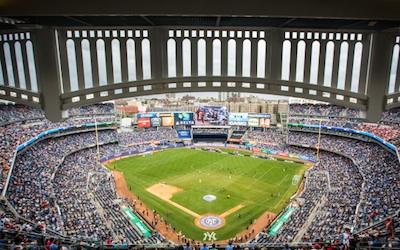 Sacha Kljestan set up Bradley Wright-Phillips and Matt Miazga for goals, and Cameroonian teenager Anatole Abang fed Chris Duvall for the winner as the Red Bulls came back from their 1-0 halftime deficit.

Duvall and Miazga have been two of the surprises for the Red Bulls under first-year head coach Jesse Marsch.

"The starting point is that we've invested in young players," said Marsch. "Chris has had a very good year for us." He added that if Duvall, the second-year right back out of Wake Forest, can clean up his occasional mistakes that have led to goals, all the other good things that he does for the Red Bulls would show up more.

"I thought tonight whenever [David] Villa came into space," Marsch added, "he helped deal with that really well. He was competitive. He was hard to play against. He was very active. He was good coming forward out on the wing and then he sniffed out a goal."

Miazga returned to the Red Bulls after having an excellent Under-20 World Cup with the USA.

"I've liked Matt from watching him last year," said Marsch. "A major goal of mine was to help him establish himself within our group. He's talented. He's got a lot of ability and now it's turning a young man into a man, into a pro, into a real center back. He's making big strides this year. We know he's only going to get better from here."

Fanendo Adi scored two goals in the second half and midfielders Darlington Nagbe and Rodney Wallace each contributed a goal and an assist as the Portland Timbers rebounded from their midweek 5-0 defeat at the LA Galaxy with a 4-1 win over the Seattle Sounders in front of a sellout crowd of 21,144 fans at Providence Park on Sunday night.

For the third straight game, the Sounders was without stars Clint Dempsey (suspended) and Obafemi Martins (injured) and lost. Seattle was also without its third Designated Player, Osvaldo Alonso, but it fell apart in the last quarter of an hour after hanging on in a match the Timbers clearly dominated.

“We just made silly errors at the end,” Schmid told reporters after the game. “We just weren’t alert enough. So they deserved to win.”

ESPN analyst Taylor Twellman said on the pregame show before the NYCFC-Red Bulls match that MLS owners are working on finding a mechanism to bring Mexican stars Gio dos Santos and Javier "Chicharito" Hernandez to MLS.

Among those mechanisms would have to a manner by which a team could pay their salaries. Presumably the clubs most interested in signing them already have three Designated Players. One way to do that would be to raise the DP threshold, currently at $436,250. How a team would squeeze what would in effect be a fourth DP's salary under its salary cap -- $3,490,000, in 2015 -- remains to seen.

Another issue would the high transfer fees demanded. Most foreign stars sign with MLS without transfer fees. Presumably, the MLS discovery process would match up these and other big signings with the club they want to play for.

Six years after being drafted out of UC Davis by the San Jose Earthquakes, Quincy Amarikwa is back with the Quakes. He was acquired in a trade that sent defender Ty Harden to the Chicago Fire.

Harden spent the last three seasons with the Earthquakes. He was selected in the second round (23rd overall) of the 2007 MLS SuperDraft by current Fire coach Frank Yallop, then with the LA Galaxy for which he started 24 matches in his rookie season before taking a year off from soccer in 2008. Like Amarikwa, Harden also played for the Rapids and Toronto FC.

Amarikwa and Harden will be available for MLS matches on July 8, the beginning of the secondary transfer window. For the first time, MLS has not allowed trades between MLS teams between its two transfer windows.