It isn't every day that someone gives you a parade.

I don't remember ever being in a parade growing up in upstate New York. Our town, Tuxedo Park, was too small. Albany (California), where I now live, organizes a parade every fall. They say 250,000 people come from across the Bay Area for the Solano Stroll that follows. The highlight was the year our son and his Little League teammates got to ride on the fire truck after they won all-stars.

New York organized a parade on Friday for the U.S. Women's World Cup championship team, a ticker-tape parade down the Canyon of Heroes. It was the first since Mayor Bill de Blasio took office at the beginning of last year and just the fifth since 9/11, almost 14 years ago.

Ticker-tape parades used to be a common occurrence. The last time a women alone was honored came in 1960 when Carol Heiss, the Olympic figure skating gold medalist, was honored. Six parades were held that year. Both presidential candidates, John F. Kennedy and Richard Nixon, had parades, the latter alongside President Dwight Eisenhower for whom he served as vice president. Charles de Gaulle, president of France, was honored with his second ticker-tape parade. The first came shortly after the end of World World II. Alberto Lleras Camargo, the president of Colombia, was also honored, as were the king and queen of Thailand. (More queens or princesses -- 13 in all -- have had ticker-tape parades than any other female honorees.)

Watching the images on Friday's parade and crowds 20-30 deep along the sidewalk of Broadway brought back images of the black & white newsreels of ticker-tape parades from bygone days. All that seemed to be missing was, well, the ticker tape. Ticker tape used to transmit stock transactions went out of fashion in the 1970s as computers became popular and was replaced by shredded paper or packing paper. That didn't prevent young girls along Friday's parade route from stuffing their pockets with paper.

Friday's parade created lots of commotion in the small world that is our soccer community. The perception of some was that MLS had hijacked the event. New York City FC and the Red Bulls had a float. MLS commissioner Don Garber was one of the speakers at the keys-to-the-city event at City Hall Plaza.

It cost an estimated $2 million -- mostly for clean-up -- to hold the parade -- a not insignificant amount. New York City -- the municipality -- was willing to pick up most of the tab but as a gesture of support underwriters were requested. The sponsorship target was $450,000. “If corporations are not falling over themselves to be associated with these champions," suggested Sonia Ossorio, New York state and city chapter president of the National Organization for Women, "then they’re missing out." If others had stepped up, maybe the parade would not have needed MLS. But others didn't, and MLS did. 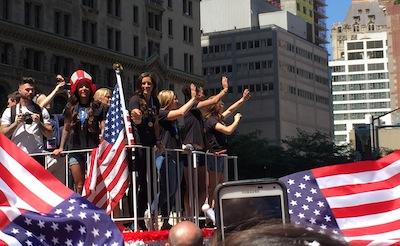 The hard reality is that women's sports is a tough sell. The Women's World Cup was a big success for Fox. AdWeek reported that it netted $40 million in ad revenue, double its initial projections and five times what ESPN netted for the 2011 Women's World Cup. But that's still just a fraction of the $529 million in ad revenue ESPN earned from the 2014 World Cup. And that's just the English-language side of the equation. Univision generated another $174 million.

Speaking for all pro soccer leagues, Garber urged the fans gathered at City Hall Plaza to go out and buy a ticket to a soccer game or watch a game on television. On Thursday night, the NWSL held its first game since the Women's World Cup final. Just turned 2,525 fans turned out in Boston. Garber pointed out that Sky Blue FC, the New York area's team, has a game on Saturday. It averages 1,298 fans a game and needs support.

As I watched Friday's parade, my mind drifted to not who had what float but how the whole event could have been organized on short notice. Again, heavy lifting by MLS, I am sure, was invaluable. I also thought about how tired the players must be. Someone said the night the players got to Los Angeles from Vancouver, half of them stayed in their rooms and ordered room service. They were that tired. I can only imagine how they feel at the end of the week. Rejoining their NWSL teams and resuming play in the next few days will be a huge challenge for everyone involved.

But what caught my eye as I watched the ceremonies at City Hall Plaza was not the players, or coaches, or staff, or the soccer dignitaries. It was the young girls in the crowd hamming it up for camera, showing off their muscles.

The U.S. women have achieved no greater victory than having these young girls return home with their pockets of paper dreaming that perhaps they too, if they have the same determination, teamwork and heart, will get their own parade down Broadway.