Matias Asorey: 'If players enjoy training, they give more effort and energy'

Matias Asorey, the Technical Director of Florida’s Kendall Soccer Coalition, was 2014 U.S. Soccer Development Academy U-15/16 East Coach of the Year and is one of U.S. Soccer's 20 candidates for the new Academy Director license, the highest-level USSF course offered for youth coaches. Asorey, who moved to Florida from Argentina at age 7, starred at FIU before a coaching career that has spanned college, club and high school.

SOCCER AMERICA: When and why did you start coaching?

MATIAS ASOREY: I started coaching in 2003 with an under-9 girls team. I coach because I love the game but also because my opportunities as a player were not as open as they are today with MLS just starting out.

When I went into the draft, Miami and Tampa had just been dropped from the league and not many players from college had opportunities to enter the league in those years.

SA: What do you enjoy most about coaching?

MATIAS ASOREY: I enjoy to compete, to build a team and give it an identity. It’s the next best thing to playing the game as a player.

SA: What do you like the least about coaching?

MATIAS ASOREY: I don't enjoy the parents, they can ruin the game for the coaches and the players. We need to fix this because they have way too much influence in the development of our youth coaches and players.

SA: In what way are parents a problem?

MATIAS ASOREY: They try to control the environment. They give their children directions that interfere with the coaching. When the kids get in the car, they give them their own ideas of how they should have played. In some case, when the parents aren’t happy, they try to get the coaches fired or reprimanded.

SA: Who were your most influential coaches?

MATIAS ASOREY: I had many. My coaches did the best they could to teach me the game at every level. I cannot single out one because I feel like I learned something from all of them.

As a student of the game I follow many coaches, but my favorite is Marcelo Bielsa. All of his teams play an aggressive attacking style of soccer and that's the type of style I try to coach.

MATIAS ASOREY: One of my coaches taught me how to speak to the officials at a young age to get them on my side. This was very useful advice.

As a coach I try to teach my players the same. Officials are people who make mistakes, so be smart and work with them and they will work with you. Barking at referees doesn’t help your cause.

MATIAS ASOREY: I grew up in a different time with the absence of the academy system. I would have enjoyed participating in this program and I think it would have significantly helped my development as a player. We trained two times per week and did a lot of running without the ball.

These are things I avoid as coach. When I plan a practice session I always ask myself if I would enjoy it as a player. If a player enjoys training he gives more effort and energy and gets more out of the activity, in my opinion. Also, I try to include the ball in everything possible.

MATIAS ASOREY: They take too long to go through the coaching licenses. The quicker they do so, the quicker they improve as coaches and begin to bring meaningful appropriate training to their players. 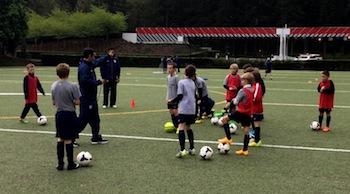 SA: What was the highlight of your playing career?

SA: Which teams do you enjoy watching most now?

MATIAS ASOREY: U.S. teams, from the full national team to all the youth national teams. I enjoy seeing our players compete at the international level, especially the ones who came out of the developmental academy.

But I also follow Boca Juniors because I was born in Argentina and raised to follow the league. I enjoy the league because any team can win the league and most games are very competitive with a lot of skillful players.

SA: How do you feel about the state of the U.S. national team under Jurgen Klinsmann?

MATIAS ASOREY: The USA won the Gold Cup in 2013, got out of the group of death at the World Cup and recently beat Holland and Germany. Klinsmann is obviously doing something right. Jurgen has brought in a lot of new players and added some much needed competition to the national team.

SA: What's your advice for coaches at the youngest ages?

MATIAS ASOREY: Forget about winning, take pride in making individuals better so future coaches do not have to teach benchmarks that should have been met. Be the best teacher not the best at results, although if you train well results will follow.

MATIAS ASOREY: I would ask MLS to make it mandatory that each team needs to have at least one player under the age of 20 on the field at all times or a set amount of minutes for the season. This would boost the young talent and get them the matches that young pros get in other countries.