Georgia United U-15/16, the only non-MLS club to reach the semifinals of either age group in the 2015 U.S. Soccer Development Academy Championships, fell to New York Red Bulls, 2-1, on Thursday.

The Red Bulls, coached by Simon Nee, benefited from the second-half ejection of Patrick Okonkwo for violent conduct; Okonkwo's 11th-minute goal was his 33rd of the season. The Red Bulls have won their last 12 games.

In the final on Saturday, the Red Bulls meet FC Dallas, 3-0 winners over the Philadelphia Union. FC Dallas, coached by Luchi Gonzalez, has shut out its last seven opponents, outscoring them 22-0. Devin Vega scored his team-leading 21st goal of the season against Philly.

Real Salt Lake AZ and the Chicago Fire won their U-17/18 semifinals to set up a final date on Saturday.

The Anthony Bruce-coached Real Salt Lake downed San Jose Earthquakes as goals by Aaron Herrera and Amar Sejdic turned RSL’s midfield dominance into a 2-0 victory. Real Salt Lake is unbeaten in its last 21 games and is on a 14-game win streak.

The Chicago Fire twice gave up one-goal leads twice against the Montreal Impact, whose 79th-minute goal sent their semifinal into overtime with the score tied, 2-2. Michael Jimenez scored two minutes into overtime and Djordje Mihailovic scored his second goal of the game nine minutes later to give Chicago a 4-2 victory. The Fire is coached by Gonzalo Segares.

This year marks the first time since the Development Academy’s inaugural 2007-08 season that all four finalists in both age groups are MLS clubs. PDA, the 2014 U-17/18 champion, this season was knocked out in the quarterfinals by the San Jose Earthquakes.

The U.S. U-18 men's national team lost to Uruguay, 2-1, and tied the Czech Republic, 1-1, at the 2015 U-18 Men’s NTC Invitational in Carson, Calif. The U.S. goals came on an own goal and from Jackson Yueill, while Jonathan Klinsmann started in goal both games and captained the Javier Perez-coached team

Against the Czechs, Sebastian Elney stole the ball in midfield and after beating a Czech defender, hit a cross that bounced into the net off Czech keeper January Stejska to give the USA a 1-0 lead in the sixth minute. The Czechs got the equalizer in the 65th minute.

Against Uruguay, Yueill scored from the penalty spot in the 83rd minute for a consolation goal after La Celeste scored either side of halftime. 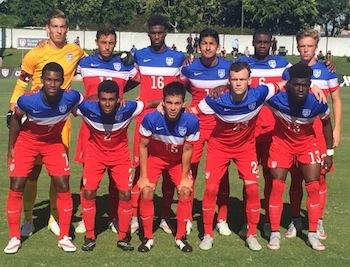 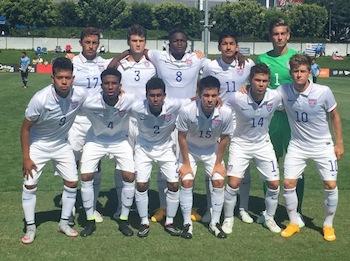