Both Acosta and Ulloa came out of the FC Dallas academy program and are among the club’s league-leading 13 Homegrown signings.

Also on Saturday, FC Dallas won the U-15/16 U.S. Soccer Development Academy national title with a 4-0 win over the New York Red Bulls.

“Hopefully this means the future looks bright and we’ll have some more players come into the first team in the next few years and make an impact,” says FC Dallas Youth vice president Chris Hayden. “We have an ownership group who’s really supportive of that.

“We want a team that does have local players. If we’re able to develop players in our academy and if they’re able to play and have lengthy careers, that makes it a lot more compelling story for our fans.”

“It’s a unique story,” says Hayden. “we have a lot of kids coming though our academy playing on the first team, but we also have a first-team staff that worked with the youth program at one point.”

In May, during a 4-1 win over Houston, 17-year-old Alejandro Zendejas came on as a late sub, joining Acosta, Ulloa and Moises Hernandez to make it four Homegrown players on the field for FC Dallas.

Hernandez, who played for the U.S. U-20s but now represents Guatemala at the senior level, joined FC Dallas at U-11. Zendejas arrived from FC Dallas’ El Paso affiliate and lived with a host family for a year and a half before joining the U.S. U-17 residency program in Bradenton, Fla. The 18-year-old Coy Craft, who debuted for the first team last season, came out of FC Dallas’ affiliate club in Tennessee.

The final victory by U-15/16 FC Dallas, coached by 2014-15 Development Academy Coach of the Year Luchi Gonazelez, capped off a run in which it outscored its six postseason opponents, 20-0. Its offense was led by Devin Vega (21 goals this season), Giovanni Montesdoeca (21), and Toshiki Yasuda (19). 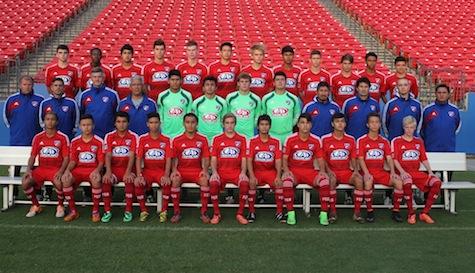 The Chicago Fire, coached by Gonzalo Segares, ended Real Salt Lake AZ’s 21-game unbeaten streak with a 3-1 win in the final. The Fire had entered the 32-team playoff field as the 15th-seeded team. 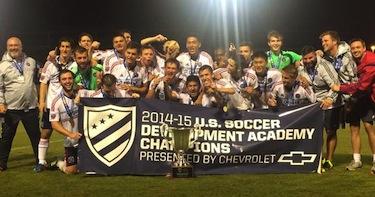