NYCFC head coach Jason Kreis is noncommittal about Andrea Pirlo's status this weekend. Jermaine Jones is nearing a return at New England following a second sports-hernia surgery. Sheanon Williams, the longest-tenured player at the Philadelphia Union, was traded to Houston.

1. Pirlo trains but debut is iffy

Pirlo arrived in the United States with his family Tuesday, took his first NYCFC training session Wednesday, and got on the field again Thursday morning. As for making his MLS debut Sunday against Orlando City SC at Yankee Stadium, nothing is certain.

“I do not know,” he said to reporters through a translator. “It really depends on how things go day-to-day. I’ve been on vacation for a month, I did work during that month and I am feeling well, but we’ll see what happens on Sunday. The only thing that is left to do is to really get to the right physical condition in order to play at my best.” 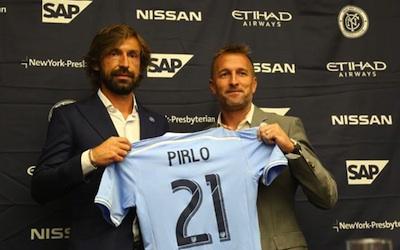 The plan is for Kreis and Pirlo to discuss the Orlando game after his fourth training session on Saturday. The normal tensions of a playoff race are ratcheted up not just by NYCFC’s newest player, but the status of Frank Lampard, who has been sidelined with a strained calf. There’s also the head-to-head battle between the two newest MLS teams; each would love to qualify for the postseason at the expense of the other.

There’s no question that NYCFC has greatly upgraded the talent on its roster. Kreis doesn’t think the assimilation process will take a long time.

2. Jones travels with Revs to Chicago.

Sidelined for more than a month by his second sports-hernia surgery in less than a year, Jermaine Jones is in the traveling squad for this weekend’s game though he’s not expected to play.

That’s the plan, anyway. Keeping the fiercely competitive Jones off of the game-day roster won’t be simple for New England head coach Jay Heaps, whose team beat New York City FC last weekend to snap a five-game losing streak and has a reasonable chance of toppling the Fire as well, with or without Jones.

Jones' first sports-hernia surgery was performed in February and he missed the first five games of the season. When he returned the lineup, the Revs posted a 3-1-5 record as he played both centerback and defensive mid. Heaps is taking the same approach this time around. The second surgery was performed a few days after he aggravated the injury in a May 31 game against the Galaxy.

“I use him where we need to win the game,” said Heaps. “He’s shown that he can play the back, but for me ultimately I like him in the midfield. The most important thing is that we’re progressing at the right speed. Last week was getting him on the field, and working and now he’s incorporating back into the group.”

Everybody in RevLand is hopeful his return will spark the same kind of run as his did his MLS debut in early August of last year. New England rolled through the rest of the regular season and the playoffs at 11-1-2 to reach its fourth MLS Cup final, which yielded a bitter, extra-time loss to the Galaxy.

“I enjoyed the time with my family and my kids, but I hate to not be on the field and to play,” said Jones. “I missed the Gold Cup, I missed here some games. It’s always sad. I’m now happy to be back. It’s a little similar to last season, the same time that I come and I hope that I can have the same presence what I had last season to help the team.”

Sometimes the best ideas stem from the worst situations.

After absorbing a 3-0 loss at Montreal July 11, Crew SC was winless on the road and in a shambles defensively. So the two defensive leaders -- captain and centerback Michael Parkhurst and keeper Steve Clark – commiserated. They decided a defenders-only meeting Monday morning was in order.

Players-only meetings are rather common but narrowing the focus down to the back line has produced two wins, albeit both against the goal-challenged Fire. Crew SC blanked Chicago, 1-0 for its first shutout in nearly three months and then rolled to a 3-1 victory marred only by a goal conceded from a free kick. Chicago’s attack is the weakest in Eastern Conference (20 goals scored in 19 games).

“We thought it would be a good time to just press the reset button and realize the opportunity at hand,” Clark said. “We’re in second place, and the defending and the goalkeeping can help carry this team. That’s who we are as a unit. We have very good players back there, so it was about coming together a little bit more.”

Columbus faces a truer test Saturday when it hosts Toronto FC, which has scored six goals in its last two games and leads the Eastern Conference in goals per game (1.56).

Seldom does a team get good news from the MLS Disciplinary Committee, but Orlando City SC is grateful for a decision regarding a slide tackle by rookie Cyle Larin last weekend against New York City FC.

Fotis Bazakos sent off Larin for a slide tackle on Sacha Kljestan that did expose the studs of his shoe but barely nicked the Red Bulls’ attacker. The Independent Review Panel, which consists of one representative from each of three officiating organizations, unanimously backed OCSC’s appeal. Larin is thus available to play for the Lions Sunday against NYCFC.

-- The Disciplinary Committee fined and suspended Vancouver midfielder Cristian Techera for stepping on Portland’s Diego Chara in the 93rd minute of a 1-1 tie Saturday. The Committee ruled that Techera had endangered the safety of an opponent when he trod on Chara’s left Achilles’ tendon as the Timbers midfielder started to dribble upfield. Techera was whistled for a foul without being cautioned.

The longest-tenured player to serve the Union has moved on.

Philly has traded Sheanon Williams to Houston along with an international roster slot in exchange for general allocation money and future considerations. He moved up from USL club Harrisburg City Islanders in August 2010, and played a club-record 141 matches for Philly in all competitions.

“Sheanon has represented the club well during his time here and we wish him the best of luck in Houston,” Union technical director Chris Albright said. “However, this allows us the flexibility to make additional moves both short and long term.”

Philly is trying to sign Swiss international midfielder Tranquillo Barnetta, according to the newspaper Blick.

Williams, 25, started 15 of his 17 appearances for the Union this season. During his time in Philly he played both outside back slots as well as in central defense, but in recent weeks head coach Jim Curtin had installed Ray Gaddis, who has also played on both corners, as first-choice right back.

Williams will help patch up the Dynamo back line, which has lost Jamaican defender Jermaine Taylor to a pulled quadriceps he suffered at the Gold Cup. The international slot will help accommodate Mexican striker Erick “Cubo” Torres.