SOCCER AMERICA: Why and when did you start coaching, and what prompted you to work in grass-roots soccer in the Latino community?

JOE SUPE: Well, I worked for the organizing committee on the 1994 men’s World Cup in Pasadena. There were a number of Latino volunteers, and right after the World Cup we met as a group and basically looked at each other and said, “How we can help integrate more Latinos into mainstream U.S. soccer?” Because we don’t have any clear representation.

We formed a group, LASCA, the Latin American Soccer Coaches Association, and we analyzed the issues across the country in terms of soccer. The thing we came back to is that we need to have more Latino coaches trained and developed.

So when a gentleman affiliated with soccer in Southern California, Hugo Salcedo, approached me in 1998 and asked me the same questions, it was easy for me to implement the programs that we worked with on a national basis, just focused on one area, Southern California.

SA: What role do parents play?

JOE SUPE: Oftentimes the Latino parents don't give support to their coaches, or to their own players, so it’s quite a challenge because the coaches out there in the Latino community do it all for free. They even have to find their own equipment, their own pinnies, soccer balls, etc. and also at times, have to chip in money for referee fees and so on. So it’s a challenging environment for the Latino coaches because of the lack of structure and the lack of participation on the parents’ side.

A recent article in the Guardian estimated that 14 years ago an estimated 60,000 Hispanic players played in unaffiliated leagues in Southern California alone. Supe believes that that number has now doubled. 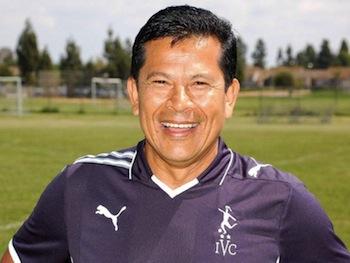 SA: How do you address those issues?

JOE SUPE: We as coaches or instructors have to do a better job of spreading the word, helping out those parents who might never have had information about how to get their child into a college program, more than just playing. They can play, and they prove that they can play but now can they do the other part, can they stick to their academics?

It’s a two-part program. We spend time during the offseason talking to parents and coaches and also to players, giving them the requirements to be part of a college program. We organize a lot of parents meetings and train the parents to be volunteers, giving them enough information so they understand what their child needs to do for the next three or four years while in high school to prepare for college.

SA: Do you receive any pushback from parents who don’t want their kids to move far away for school?

JOE SUPE: I’ve seen that a bit on the female side. They are very apprehensive about their daughters going more than 30 miles away from home. Culturally, they are very protective of their daughters. I think that is something that hinders the development of girls programs more than the boys.

SA: How do you feel about the lack of Latina representation on the women’s national team?

JOE SUPE: We see the level that the U.S. women’s national team plays at and if they want to step up to that, they need to be ready and that starts with the parents, that starts with the coaches. That’s the parents investing in their kids, and Latino parents especially do not like to spend a lot of money on soccer. Obviously, to play at that level you need to pay quite a bit of money.

Thinking back to the parents, they need to allow their children to develop. On the boys side, a lot of the parents are very good about telling their kids to play but not helping out in terms of assisting coaches or volunteering. Parents need to be able to do more of that. For any kid or individual to succeed, you need to have a good parent guiding them all the way until they have reached success. It doesn’t happen overnight.

Now our girls have a long way to go. Part of not being represented right now falls back on what we do as coaches and parents. We can’t just cry, “We’re not being allowed to participate.” What have we done to help our girls to get to that state? We have to look at ourselves and not the system. The system is there for anybody that can take advantage of it. It’s just that we have to be better as Latinos.

SA: But what about the notion that the elite youth soccer can be prohibitively expensive?

JOE SUPE: True! Club soccer has become "big business" in America and it is about quantity not quality of tournaments, camps and clinics.

We have to be smart shoppers and look at the quality of the clubs and what they have to offer in terms of the organization, knowledge and the preparation of their club coaching staff and trainers. Must importantly, we have to make choices on the investment for the future of our youngsters and make the financial sacrifice, similar to what the average American soccer family does. Here is where players experience and acquire the education to train and develop -- and someone along the way will recognize our talent and give us a hand, but we must be prepare first and most of all.

Latinos have a huge potential in front of us; anything from elite clubs, ODP, regional teams, college and universities in the USA, Mexico and Central America. Therefore, we must set our individual specific goals as of how far to go with playing the game, and work toward achieving those goals.

As we continue to grow in numbers, we also have the need to prepare better coaches, better trainers and administrators. We are also in need to develop leadership and quality instructors who focus on mentoring and developing our coaches at the national level.

SA: What advice would you give to someone my age [22] who wants to become a coach?

They need to identify technical and tactical breakdowns, and know how to make corrections. So the best advice for them is to develop a plan, to plan a session, to implement a session on the field. The other part is to understand your coaching objectives, understanding the direction you’re going in, why is it that you’re coaching, why do you want to coach.

SA: In your second year at the helm, you led Irvine Valley College to the playoffs for the first time in 20 years. What is your winning strategy?

JOE SUPE: [Laughter] Really a lot depends on the program. My winning strategy is developing possession-minded teams that have good combinations and good finishing. Basically, to focus on moving the ball into the final third of the field and keeping possession, finding the time and moment where we can finish. I think we had a very successful year last year finishing third in the league.

SA: What teams do you enjoy watching most?

JOE SUPE: I really fell in love with the game with the Brazilian soccer team in 1986, probably one of the best teams I’ve seen. It was a joy to watch them play. Their abilities, their flair, their ease on the ball, their comfort, their possession. It wasn’t about who won the game, it was about who managed the game. We need to develop that passion here in the United States.