U.S. U-18 boys kick off new cycle with Sweden trip

U.S. U-18 boys national team coach Javier Perez has named a 20-player roster for the 2015 Open Nordic Cup Tournament in Sweden, where the USA will face the Faroe Islands on Tuesday, followed by games against Iceland Wednesday and Sweden Friday, and a Sunday placement game.

The trip kicks off a new cycle for these U-18 players. All the players, besides 2000-born Georgia product Andrew Carleton, were born in 1999. They had been previously competing with the U-15 and U-16 national teams.

Carelton played up when he helped Georgia United reach the 2015 U-15/16 Development Academy semifinals. He was the USA's leading scorer with six goals when the John Hackworth-coached U-15s won the Torneo Delle Nazioni in May.

Goalkeeper Eric Lopez, also a member of the Torneo Delle Nazioni champs, last year became the youngest player to sign a USL professional contract when at age 15 he inked with LA Galaxy II. The only foriegn-based player on the squad is Northern Californian midfielder Jonathan Gonzalez, who joined Monterrey's youth program after earning MVP honors at the 2013 Alianza de Futbol finals. 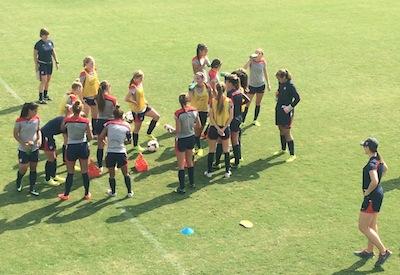 This marks the U-16s' third camp of the year. All the players are age-eligible for the U-17 Women’s World Cup in 2016, but the main birth year for that tournament is 1999. This age group is in a two-year cycle that will graduate players to the U-18 and then the U-20 national teams with the goal of playing in the 2020 U-20 Women’s World Cup.

D.C. United to play in U-13 Concacaf Champions League Tournament

D.C. United will represent the USA at the U-13 Concacaf Champions League Tournament in Mexico City Aug. 4-8.

U.S. Soccer chose D.C. United to represent the Development Academy at the eight-team tournament because of its record of developing players and its senior team’s history in Concacaf play. D.C. United became the first MLS team to win the Concacaf club title, winning the Champions Cup in 1998, and it has made an MLS record 10 appearances in what became the Concacaf Champions League in 2008.

Since 2007, the D.C. United Academy has placed 38 players on U.S. youth national teams from the U-14 to U-23 age groups and has helped develop professional players such as Bill Hamid, Andy Najar, Romain Gall, Jalen Robinson, Michael Seaton and Conor Shanosky.

“It’s a great honor for our club to be selected and represent U.S. Soccer in this tournament,” said D.C. United U-13 Academy head coach John Bello. "For them it’ll be a real eye-opener. … Sometimes because these guys play for an MLS Academy, they’ll think they’ve already achieved everything, when the reality is they need to keep working really hard on their development in order to compete at an international standard, which is what their overall objective is. Seeing where they stack up internationally should give them a good gauge of where they stand and what they need to build on.”