A huge throng at LAX when his plane landed Sunday, dozens of cameras and reporters at his first training session Monday, and a packed press conference Tuesday to officially introduce him and the No. 10 jersey formerly worn by Landon Donovan. The era of Giovani Dos Santos in MLS has begun.

“This is a big club, with big players, and I have come here to win,” said Dos Santos, 26, who was acquired for a transfer fee of $7 million and signed to a contract valued at $27 million in base salary over four and a half seasons, according to the Los Angeles Times. “Timing is important in any move, and for me it was the right time to come her, I think in the prime of my career, and I’m ready to take that challenge.” 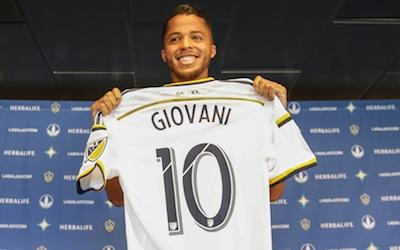 Like David Beckham before him, Dos Santos was the first player whose signing was announced following a major initiative in MLS's player signing mechanisms. Beckham signed as the league’s first Designated Player in January 2007, and Dos Santos signed with the Galaxy after MLS created a mechanism and funding source, Targeted Allocation Money, allowing the Galaxy to buy down the pro-rated salary-cap charge of defender Omar Gonzalez so he doesn’t count as a Designated Player.

On the Galaxy’s ledger, Dos Santos, Robbie Keane and Steven Gerrard fill the three slots allotted to DPs. He joins one of the strongest squads in MLS, which already features Gyasi Zardes, Sebastian Lletget and Juninho, and head coach Bruce Arena sees parallels to how the Galaxy played when it had Beckham and Donovan on the field with Keane.

“There’ll be a lot of similarities,” said Arena. “In the case of Gio, his qualities are that he’s a very good attacking player. We need him close to goal and we need the right players around him. Everyone needs to know their responsibilities.

“Gio can play as a striker with Robbie Keane, he can play in the midfielder underneath Robbie, or out wide in a variety of positions. As we grow together as a team, we’ll have a better understanding where he fits on the field to help both himself and the team. That’ll take a little bit of time. We will find a way for everybody to play well together.”

Dos Santos joins Toronto FC forward Sebastian Giovinco (28) in the category of international stars who have opted for MLS well before their 30th birthday, and he also fills a void among the demanding Mexican-American audience that the league has struggled to attract since former keeper Jorge Campos, who played for the Galaxy in the first two seasons of MLS (1996-97) left the Fire in 1998.

“I am very proud of being Mexican,” said Dos Santos, a native of Monterrey who joined the Barcelona program as a teenager and played one season with the first team before being sold to Tottenham in 2008. “It’s going to be great to play here with Mexican fans in Los Angeles. I hope I can represent very well my Mexican fans and the Mexican people.” 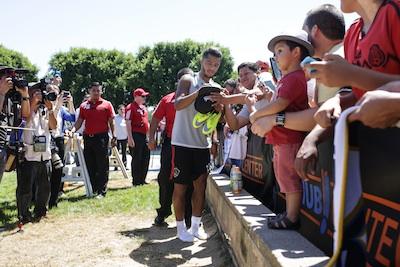 He never settled in at Spurs, and went out on loan three times before landing at Mallorca in 2012. (The paths of Keane and Dos Santos crossed briefly at Tottenham during two stints at the club by the Irish striker.)

Dos Santos scored six goals in 29 games as Mallorca was relegated, which prompted a move to Villarreal that he represented 58 times, netting 12 goals. All the while, his career was being tracked by the Galaxy and specifically assistant coach Jovan Kirovski, who stepped up his pursuit after being named technical director in January 2013.

“This is a long time coming for us, we’ve been chasing Giovani for a long time,” said team president Chris Klein of inquiries that started informally several years ago. “We’re very excited that he’s finally here and looking forward to getting him on the field.”

Arena will get his new arrival on the field as soon as possible and with two home games on tap, the timing is ideal. Unless misfortune intervenes, Dos Santos will get some minutes Thursday in the Galaxy’s Concacaf Champions League group opener against Central FC and Sunday in a league showdown with Seattle. Three days of hubbub will be manifested this week at StubHub as the Galaxy pushes hard on two competitive fronts.

“We want to be the best club not only in our league, but in the region,” said Klein. “We know there’s a number of different competitions, different ways, to measure that, but our goal is clear: We want to be the best in this region, and we’re going to continue to be aggressive every step of the way and in everything that we do.”


Editor's Note: This article was updated to reflect the fact the MLS player mechanisms that allowed the Galaxy to sign Beckham in 2007 and Dos Santos in 2015 were initiated for all clubs to use and not specifically for the Galaxy. Six MLS clubs have already used TAM to facilitate transactions.
concacaf champions league, los angeles galaxy, mexico, mls
7 comments about "Hubbub roils StubHub for Dos Santos introduction".
Read more comments >
Next story loading