How Zelalem & Co., are faring since the U-20 World Cup

It's been nearly two months since the USA's quarterfinal run at the 2015 U-20 World Cup. The performance included wins over Myanmar, New Zealand and Colombia. Coach Tab Ramos' team held eventual champion Serbia to a scoreless tie before getting eliminated in a penalty kick shootout.

Here are club updates on some of the U-20 players:

EUROPE: Playermaker Gedion Zelalem only got 26 minutes of first-team action for Arsenal during summer preseason play, but the 18-year-old is shining for the Gunners at the Durban Under-19 International Tournament in South Africa. He scored the deciding spot kick panenka-style against VfB Stuttgart that sent Arsenal to the final and highlights of some his skillful displays have gone viral.

Emerson Hyndman, who ran the midfield with Zelalem, has reportedly turned down an extension to his contract, which expires next summer, with second-tier English club Fulham. He has reportedly drawn interest from other clubs throughout Europe.

The one player set to be regular with a top flight European club for a second straight season is forward Rubio Rubin, who scored three goals in 26 appearances for Dutch Eredivisie club Utrecht in the 2014-15 season.

MEXICO: Paul Arriola scored for Club Tijuana in its 2-1 win over Zacatepec in its Copa MX opener and also saw action off the bench in Tijuana's first two Liga MX games of the Apertura 2015.

MAJOR LEAGUE SOCCER: Marky Delgado has been serving Toronto FC well as a replacement for Michael Bradley, who was on Gold Cup duty and is now sidelined with an injury. Delgado has started eight straight games, most recently a 4-1 win over Orlando City on Wednesday. He has two goals and two assists.

Matt Miazga returned to his starting position on the Red Bulls’ backline after the U-20 World Cup and has gone the full 90 in their last seven games. The central defender scored his first MLS goal in June.

Midfielder Jordan Allen has come off the bench four times and started once for Real Salt Lake and forward Bradford Jamieson IV has made one appearance for the Galaxy since the U-20 World Cup. Defender Erik Palmer-Brown got his second start of the season for Sporting Kansas City on July 24. San Jose’s Tommy Thompson has played in the Earthquakes’ last seven games (three starts).

The camp will include friendly matches against England on Aug. 16 and 19.

"At the moment England is trying to do a lot of the same things that we are," Hackworth said. “Now we’ll go there and there will be a buzz about soccer and the new season starting and at the same time we’ll be at [the FA’s] national training center, and I think both coaching staffs are very much of the mindset that these friendlies are an opportunity to build on the player development principles while doing it against a similar opponent.” 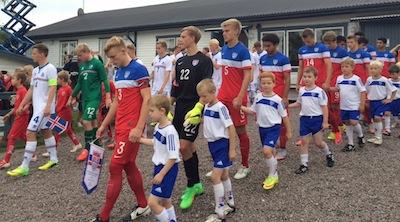