'You can't communicate too much with parents' (Kim Calkins Q&A)

Kim Calkins was appointed Washington Youth Soccer's Technical Director in July. Calkins, who played collegiate ball at the University of Portland and professionally for the Boston Breakers, brings 15 years of youth, high school and collegiate coaching experience to the position.

SOCCER AMERICA: What are your main tasks and objectives as a state technical director?

KIM CALKINS: Timo Liekoski, our previous technical director was an extremely smart and honest leader in the game and he was able to teach and share a lot with me. I have to work with all levels of the game, not just the elite groups, but the different volunteers and boards and associations and other outwardly facing groups in U.S. Soccer as well.

SA: What is your advice for coaches at the youngest ages?

KIM CALKINS: Keep coaching simple, foster an environment of fun and enjoyment for the sport. Let the kids play and discover a lot on their own as well.

SA: What about coaches who complain about dealing with parents?

KIM CALKINS: Communicate. I don’t think you can communicate too much with parents. Where they don’t have information is where they fill in the gaps, which is where frustration comes in. Talk to them after games, email them weekly, give them an idea of what you’re thinking and allow them an opportunity to participate. 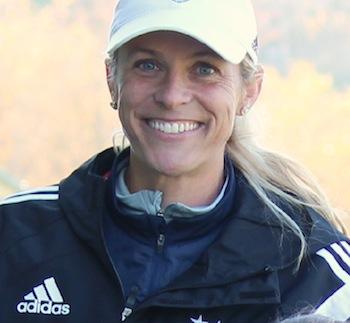 KIM CALKINS: Yes. With my college coach, Clive Charles, especially. He often talked to us about life lessons. With any of those players’ lives you have the opportunity to be a part of on the soccer field there is a lot of life lessons you can learn. Keeping those in perspective while you’re teaching soccer is something I want to implement in my own coaching.

SA: Anything you advise not to do?

KIM CALKINS: Sometimes there are coaches who coach to stroke their ego. Coach not to have players do something for you. Coach because you care to teach them and see them grow as players.

SA: What role do you think tournament play should have in youth soccer?

KIM CALKINS: Great question. For some groups it’s a way to generate income for local clubs but certainly a lot of parents want their kids to be in multiple tournaments. There’s a lot of research that supports that that is not entirely the best thing for the players developmentally. The purpose of tournament play for the host and for the teams should be examined locally.

We hear lot of things being parent-driven. Having involved parents isn’t so awful as long as they’re educated. ... Soccer experts [must] continue to educate in a parent-driven culture.

KIM CALKINS: Whether it's soccer or school or music, youth needs good teachers regardless of gender.

SA: How do you make good game-time decisions?

KIM CALKINS: You will have the most impact when you understand the strengths of the whole group. When you can clearly identify with your players and communicate their roles, you can make successful strategic changes and they are brought into that process.

KIM CALKINS: Honestly, I would create a simple structure to have it make sense for parents, for all levels of play. When parents go to sign up their kids there would be a simple flow chart of the different levels for the players to play in. There are a lot of different options and acronyms out there. [Having] many choices isn’t bad, but it becomes diluted and confusing for parents. I think something more simplistic will be well received by families.