Another U.S. U-17 goes pro as Velela joins Cosmos

Alexis Velela, who signed this week with the NASL's New York Cosmos, is the latest member to go pro from the 20-player U.S. U-17 national team squad that qualified last March for the 2015 U-17 World Cup.

The 17-year-old Southern California product, who played for the San Diego Surf and Nomads, started all six qualifying games. At the Cosmos, Velela joins U-17 teammate, striker Haji Wright, who signed with the NASL club in March. Wright, who played for the LA Galaxy’s academy team, had been a guest player with Germany’s Schalke 04 but was unable to sign because of the FIFA ban on clubs signing minors from other countries. 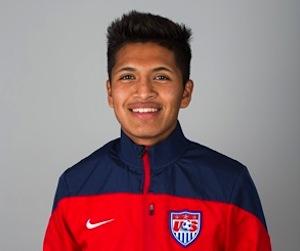 “Alexis is an exciting prospect with great potential,” Cosmos coach Giovanni Savarese said in a press release. “He is a young player with strong technical qualities and is capable of playing in multiple positions. We are delighted to have signed him.”

Two U-17s joined Mexican clubs before the qualifying tournament: Joe Gallardo (Monterrey) and Brandon Vazquez (Club Tijuana), although Gallardo joined U-17 residency in Bradenton, Fla., last September while rehabbing from a broken shinbone before the qualifiers, in which he scored four goals. (Gallardo suffered another shinbone break after the qualifying tournament and is rehabbing to be ready in time for the U-17 World Cup in Chile Oct. 17-Nov. 8.)

Alejandro Zendejas, whom FC Dallas signed as a homegrown player late last year, made his MLS debut in May and has since made five more appearances, including one start.

Wright made his first-team debut for the Cosmos last weekend when he played the first 50 minutes of a 3-3 tie with the Fort Lauderdale Strikers.

Of the European contingent, de la Torre is playing for Fulham’s U-21 team and last Friday notched an assist in a 1-0 win over Brighton & Hove Albion in the Barclays U21 Premier League Division 2 opener. Pennsylvania product Pulisic inked his contract with Borussia Dortmund last February and helped Dortmund win the 2015 German U-17 national championship. Barbir, also out of Pennsylvannia, is playing for West Bromwich’s U-18s and went the full 90 last weekend in a 1-1 season-opening tie with Manchester United.

In the placement game against the Finns, the Colorado Rush’s Griffin Dorsey put the USA ahead in the first half with a header off a cross from Northern California product Jonathan Gonzalez, who plays for Mexico’s Monterrey. Richmond United’s Nick Taitague scored the USA’s second,  set up by Justin Rennicks (New England Revolution).

Georgia United’s Andrew Carleton scored on a penalty kick for the USA’s only goal in the loss against host Sweden.

The trip marked the first gathering of the U-18s’ new cycle. 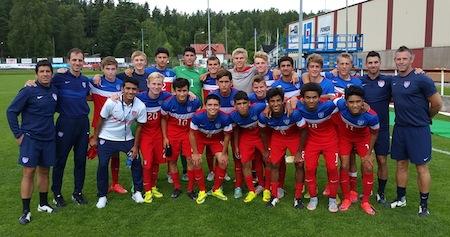