The San Antonio Scorpions' 33-year-old Omar Cummings became the first player to hit the 10-goal mark this season and leads the NASL Golden Boot race, ahead of Carolina's Nacho Novo and last year's leading scorer Christian Ramirez, who struck 20 times for Minnesota United in 2014 but got off to a slow start this season before scoring in six straight games.

Cummings, who struck twice in a 3-3 tie with Atlanta, has 15 games left to surpass his career-high for a season. He struck 14 times for the Colorado Rapids during their 2010 MLS title-winning season.

Cummings, who joined the Scorpions this year after eight MLS seasons, credits much of his production to teammates Billy Forbes and Rafael Castillo.

“You try to build relationships, especially with guys that are going to feed you the ball,” Cummings told NASL.com's Matthew Levine. “As a striker, you want to have that relationship and that click – where you don’t have to say anything, you just do what you’re doing and sometimes you don’t have to even look.

“It’s like instinct; we do this in practice day in and day out, and they know that if they make that play, I’m going to be there.”

NASL Player of the Week
Pedro Mendes, the Atlanta Silverbacks’ Brazilian forward, scored twice in a 2-1 win over Fort Lauderdale and once in a 3-3 tie with the San Antonio Scorpions. (He has five goals in his last seven games.) 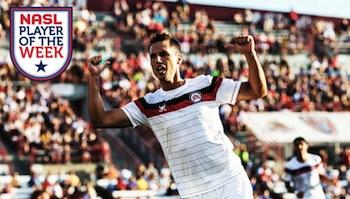 NASL Play of the Week
The Atlanta Silverbacks' Junior Burgos curled this free kick past San Antonio goalkeeper Matt Cardone during their 3-3 tie.