The Philadelphia Union has joined the movement of MLS teams operating their own USL squads.

Lehigh Valley -- nickname, team colors, and logo to be determined – will start play next season. It will play its home games at Goodman Stadium (capacity 16,000) on the campus of Lehigh University, which is located about 50 miles north of Philadelphia in Bethlehem, Pa. 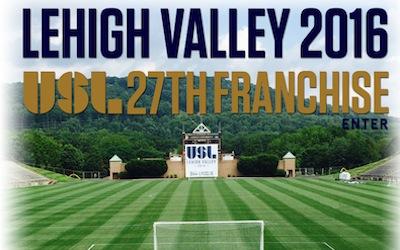 Its addition increases USL membership to 27 teams for the 2016 season and gives MLS nine direct representatives in that list. (Eleven other MLS teams have affiliations with independently owned USL teams.) Orlando City announced in June it will launch a USL team in 2016 but the USL Board of Directors has not yet formally approved the application.

“This is another landmark day in the short history of the Philadelphia Union,” said team president Nick Sakiewicz at a press conference Wednesday. “This was a decision that we carefully studied and analyzed all possible options. In the end, we’ve chosen an extraordinarily great soccer community in the Lehigh Valley that is underserved for professional soccer.

“Combining our Club’s culture with this amazing soccer community and the spectacular venue that Goodman Stadium provides will create an incredible environment for the growing fan base in the Lehigh Valley. By adding a USL team we ensure that our players will compete at the highest level under MLS. It’s of the utmost importance that at every level of the Union organization we challenge our players with competition in the top professional environments.”

Goodman Stadium is used by the Lehigh University football team and in the past was a training site for the NFL Philadelphia Eagles. Its playing surface is grass and not surrounded by a running track. The area has ties to the early days of soccer in the United States; one of the top semipro teams of the early 20th century was Bethlehem Steel FC, which won the U.S. Open Cup five times from 1915 to 1926 as well as titles in several different leagues.

“We are extremely pleased to add yet another ownership group that is experienced in operating highly successful professional sports franchises to the USL family,” said league CEO Alec Papadakis. “It’s an honor to return soccer to not only one of the most historic, but also vibrant and growing markets in the U.S. With sophisticated ownership and the passionate sports fans of the Lehigh Valley, this club has the formula for major achievements on and off the field.”

The team name will be decided by a fan vote to be conducted in September among four choices to be determined. Sakiewicz said the team will not be named Union II, as is the case with six USL teams operated by MLS teams, among them the Galaxy, Sounders and Timbers.

By this launch, Philly will end a partnership with Harrisburg City Islanders that started when the Union joined MLS in 2010. Approximately two dozen players have been loaned to Harrisburg by the Union since the partnership was formed, and several former Islanders have made the jump to MLS.

Islanders majority owner Eric Pettis said in a team release, “We thank the Philadelphia Union for being a great partner,” he said. “They were generous and helped us at a time we needed it. Last year was a great example of how well the partnership worked.”

Harrisburg City reached the 2014 USL championship game fielding several Union players on loan. Sheanon Williams, who was recently traded to Houston, is one of several players to graduate from the Islanders to the Union since it started in MLS.