Cellerino scored 17 goals in 57 appearances for Wanderers. His previous clubs include Chile’s Rangers, Peru’s Universidad San Martín, with which he won a league title, and Italian Serie B club Serie B club Livorno.

“I’ve had some really positive conversations with Gio about the team’s philosophy, and the style of play really appeals to me,” Cellerino said. “I’m looking forward to getting to New York and starting training and doing whatever it takes to help this team win another championship.”

NASL Player of the Week
The Jacksonville Armada’s Colombian midfielder Jaime Castrillon scored in a 3-0 win over the Carolina RailHawks and in 1-0 win over the Atlanta Silverbacks. 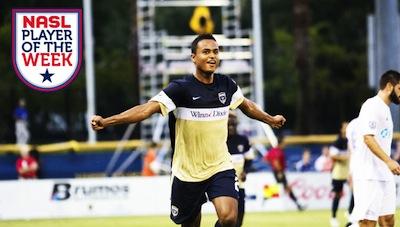 NASL Play of the Week
The Fort Lauderdale Strikers’ Stefano Pinho struck a beauty from 22 yards out to put the Strikers’ on the way to a 2-1 win over the Tampa Bay Rowdies.