U.S. Soccer has mandated a significant alteration in how American soccer will be organized -- changing the birth-year registration from an August-July format to January-December.

The current cutoff date in American youth soccer is Aug. 1. The summer date has been common in U.S. youth sports, inspired by its correlation to the academic calendar. The international cutoff date, however, is Jan. 1.

“I think the birth registration changes make everything easier,” U.S. Soccer Youth Technical Director Tab Ramos said in a press release. “Over the years you go through coaching youth and people are confused about what age group they’re in, if they’re supposed to be U-15 vs. U-14, because they're born in such-and-such year, but they’re born in June.

“This new calendar makes things easier for everyone. If you’re born in a certain year you belong in that certain age group. It also gets us on the same calendar with the rest of the world, so now it becomes easier to identify for U.S. national teams and everything else when it comes to international soccer.”

The mandate will go into effect by August 2017.

U.S. Soccer also believes it will provide clearer information on player birthdates to combat relative age effect (RAE) -- the selection bias that favors players who are more physically mature than their peers because they were born earlier in the year.

U.S. Soccer says the birth-year registration initiative will not cause the dissolution of age-group based teams that already play together, “but will rather give players the opportunity to ‘play up’ with older age-groups.”

“We are easing into it and working towards it,” Ramos said. “Best practices will come next year as we work towards 2017 and I think we’re doing it the best way by easing into it. You don’t want to get into scenarios where larger teams are immediately getting cut into smaller teams.

“We at this point let them decide on their own how they manage the transition. Some clubs have already made the change starting this year, and are already ahead of the curve, which is great. In general, we have to give everyone the opportunity to get everyone comfortable with it, but it will come.”

The U.S. Soccer Development Academy has been using the Jan. 1 cutoff since its launch in 2007.

SMALL-SIDED STANDARDS. U.S. Soccer has also standardized small-sided game participation and field size based on player age groups for U-6 to U-12, to provide “a more age appropriate environment that will allow players with a better opportunity to develop heightened soccer intelligence and on-the-ball skills.” 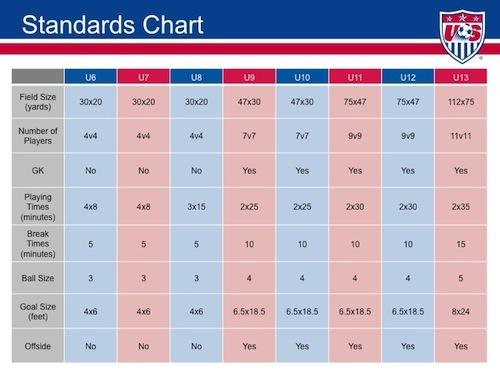 “Now you’re playing 4v4, 7v7, and 9v9 at a young age and chances are the players are involved a lot more in those types of games,” said Ramos. “Over a period of 10 years, there are thousands of more times that you’ve been involved in certain plays and that will speed up the process of players getting more comfortable.

“The players, by being involved in the play constantly, will learn how to make important plays, and make plays individually that can break down teams."

The small-sided mandate will also go into effect by August 2017.

“When the game is large, there’s many different ways to hide," says Ramos. "In a smaller game, there isn’t.”