On Monday, U.S. Soccer announced to two initiatives that will be mandated by August 2017. One was the standardization of small-sided games through age U-12. Fewer players on age-appropriate fields -- that has been the trend in American youth soccer for quite a while now.

It is the second initiative that greatly alters the way in which youth soccer has been administered in the USA: changing the birth-year registration from an August-July format to January-December. That is, changing the cutoff date from Aug. 1 to Jan. 1.

The main reason for making the change, U.S. Soccer stated, is to “align registration with the international standard.”

While detractors of the change say that international standards are irrelevant to the majority of Americans soccer-playing children -- only a small percentage end up in the national team program – the leaders of the U.S. Youth Soccer, U.S. Club Soccer and AYSO support the move.

“We’ve been in a favor of it for quite a while,” says Sam Snow, U.S. Youth Soccer’s Coaching Director. “It’s a matter of aligning with what the rest of the world does. It makes it easier for the teams that travel overseas. Also, for teams from other countries that come here to play in America, it makes it more straightforward what age group you’re in.

“Perhaps it’s a little more administrative in that regard, but however we chunk a 12-month year, whether it’s the actual calendar year or the school year, it’s still a 12-month chunk.” 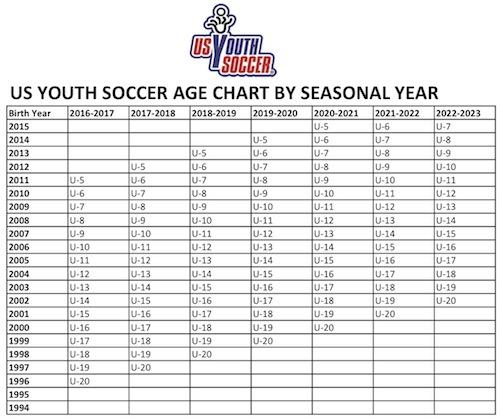 AYSO may be known for recreational soccer, but it’s also famous for providing the first soccer experiences for future stars, such as Landon Donovan, Alex Morgan, Julie Johnston, to name just a few. So AYSO Deputy Executive Director Mike Hoyer says it makes sense for AYSO to be on the same calendar with other organizations.

“We have some time between now and the mandate,” says Hoyer. “We are reviewing it for how to implement it. We have nearly half a million kids. We have all the regions across the United States. We’re looking at it from, ‘Here’s the mandate. How do we make this work? What’s our timing on education, on updating our processes and procedures? Overall, there will be some impact, but I don’t think it will be that big.”

One of the areas of impact AYSO must deal with is at the U-19 age group.

“We run fall and spring programs,” Hoyer says. “So you can have a kid who’s 18 in the fall but turns 19 in January, so that person won’t be able to participate in the spring.

“It doesn’t affect a huge part of our player population but we have several kids who come back. They call it their last AYSO hurrah in that spring season before they graduate from high school, before they move on.”

The other area in which a difference will be felt is when children first sign up -- and have traditionally expected to play with classmates. However, the date change doesn’t separate all kids in the same grade. Playing up is an option. And even now it’s not uncommon for teams to be comprised of kids from different grades, not to mention different schools.

There will also be the splitting of squads by August 2017 when all teams must comply.

“The change is temporarily difficult for everyone,” says Snow. “I liken it to ripping the bandage off. It hurts, but hopefully momentary. I think it’s pretty rare out there that teams have 100 percent of the players coming back year after year. People move. Change schools. If they’re your friends, they’re going to stay your friends.”

Payne says people who complain that the change is being made to make the system more convenient for Development Academy clubs and the national team program “should recognize they’re part of something bigger than themselves.”

Says Snow, "The calendar year will become the norm and in a couple years everybody will just settle into that."