After serving one game as Tampa Bay Rowdies interim coach in the wake of the firing of Thomas Rongen, Stuart Campbell has been named Rowdies head coach. The 37-year-old Englishman had been an assistant coach after joining the Rowdies as a player for the 2012 season.

Rowdies owner Bill Edwards fired Rongen and general manager Farrukh Quraishi, on Aug. 21 after a 2-0 loss to then-last-place Indy Eleven dropped the Rowdies' fall season record to 2-5-1 (win-loss-tie), although they were still in the playoff zone in fourth place in the overall standings.

The Rowdies fell, 3-1, to Minnesota United with Campbell as interim coach. He played 31 games on the backline for the Rowdies during their 2012 championship season and in 2013 served as player/assistant coach.

“I have full confidence in Stuart’s ability to coach this team to victory,” Edwards said. “Stuart has been an integral part of the club since his arrival, and has earned the respect of his players. He will lead with the stability and unity necessary to win.”

NASL Player of the Week
Fort Lauderdale Strikers forward Stefano Pinho scored both goals in a 2-0 road win over FC Edmonton on Sunday. 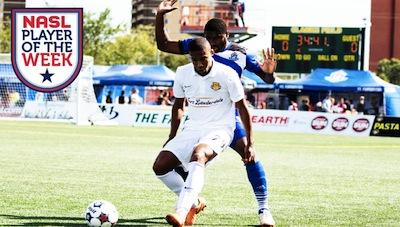