Klinsmann: 'This is about proving a point'

The countdown to the Oct. 10 winner-take-all match against Mexico at the Rose Bowl began in earnest with Jurgen Klinsmann's selection of players for friendlies against Peru and Brazil. There was heavy turnover with the return of Tim Howard and Geoff Cameron, who have not played in 2015, and Matt Besler and Jermaine Jones, who have not played since February. Out for the Peru game at least are nine players who started at the 2015 Gold Cup.

"This is really now time for the guys to make a really strong impression that they understand the situation we’re in because of what happened in the Gold Cup," Klinsmann said in an interview with USSoccer.com. "These games are not about developing things for the future. This is about proving a point towards the Mexico game.” 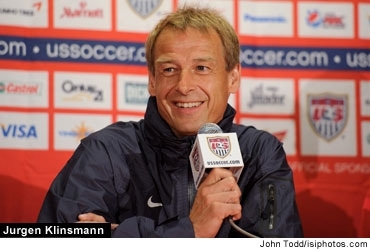 It's a good thing the 2017 Confederations Cup playoff game is more than five weeks away as injuries have taken a toll on the U.S. squad. Over the weekend, Timothy Chandler and DaMarcus Beasley were injured, joining Fabian Johnson on the injury list.

Clint Dempsey again didn't play for the Seattle Sounders though he is scheduled to join the team for the match against Brazil. Neither Nick Rimando nor Kyle Beckerman was selected as Klinsmann said the players, both of whom played 90 minutes for Real Salt Lake Saturday night, were nursing injuries.

When you add in Klinsmann's decision not to bring back Brad Evans, that leaves only one of the five outside backs who played at the Gold Cup in the squad, Greg Garza, who was in the team for the group stage, was called up even though he has not been dressing recently for league games at his new Mexican club, Atlas.

The situation at outside back is the most dire, but throughout the lineup are major question marks.

"Some positions are definitely there to grab," Klinsmann said, "but you've got to grab them with a lot of determination and a lot of ambition and that's why bringing back Tim Howard now and Jermaine Jones and Geoff Cameron kind of signals the fight and the competition now happening between the older established ones and the new wave of players."

Klinsmann signaled an intense training camp ahead of the two friendlies.

"We will just want to make it very, very intense and competitive from the first day on in training," he said, "so the veterans need to set the tone and they need to understand that there's a high energy there."

Note:  Michael Bradley (Toronto FC) and Clint Dempsey (Seattle Sounders) will be added to the U.S. roster for the match against Brazil. William Yarbrough will return to his club and be replaced by Sean Johnson (Chicago Fire).
americans abroad, brazil, jurgen klinsmann, men's national team, mls
17 comments about "Klinsmann: 'This is about proving a point'".
Read more comments >
Next story loading