When you disagree with volunteers and refs -- do so politely

These people are volunteers. Be nice. If you disagree with their vision, do so politely.

Referees make a tiny bit of money. Be nice to them, too.

Dealing with referees can be tricky. Through a certain age (in our area, U8), we have no referees, and coaches are responsible for making games fair and safe. Then coaches hand over that responsibility to referees who are often young, inexperienced and timid. These referees might not call the fouls that would have made coaches stop the game and talk to the kids. They might not even understand the simple mechanics of keeping a game running smoothly.

Most youth clubs -- and certainly most referees -- will tell coaches to say nothing to the refs other than “thank you” after the game. And that should be the goal. But you’ll run into some practical problems.

Some young refs don’t make clear signals -- which team takes a throw-in, whether a free kick is direct or indirect, and so on. Many a U9 coach has yelled instructions to his team for how to take a free kick, something not often covered in practice, only to find that the other team is the one taking the free kick. Oops.

The bigger concern is safety. What do you do when a ref isn’t controlling the games, and the fouls are getting harder? What do you do when a kid gets bonked in the head, and you’re caught between obeying your licensing course’s concussion protocols and your club director’s admonition against yelling at the ref?

I’ll give two situations from my experience -- one of which I’ll apologize for, one I won’t. 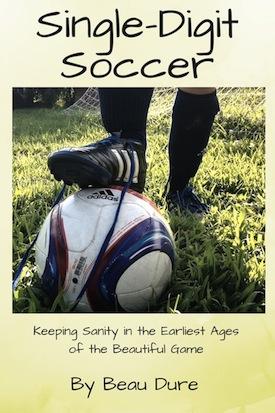 We had an All-Star tournament in which our guys were getting fouled a good bit. In the second game, with our second laissez-faire referee, I had to go out on the field to check on an injured player. I made a sarcastic comment to the ref: “You know, you can call fouls at U9.” He chirped back that they were 50-50 plays. Things went downhill from there. The ref could’ve handled it better, but I could’ve, too. When I surveyed youth referees about what I should’ve said in this situation, the responses ranged from “nothing” to “Pardon me, but this is a little more physical than we’re used to.”

Back in our House league, a hard shot nailed one of my players in the head. Somehow, he didn’t fall. He just held his head and started crying. Play continued. I screamed to stop play. The ref didn’t, the other team didn’t, and our team did. After the other team’s inevitable goal, I went out to check on our team’s injured player, and I yelled to my team not to worry about the goal they had conceded.

The ref and I had a good conversation afterward, so all was well. Some of the other team’s parents might’ve thought I was a freak, but they could deal with it.

But that is, of course, a rare situation. Don’t yell at refs over offside calls. They’re going to get those wrong. And it’s often tough to see who played the ball before it went out of play for a throw-in. No harm will come from getting those plays wrong. Give the poor kid or well-intentioned adult a break.

So to sum it up: Safety first; shut up otherwise.

The is an excerpt from new Beau Dure’s book, “Single-Digit Soccer: Keeping Sanity in the Earliest Ages of the Beautiful Game,” 2015, 237 pages, Kindle Edition $4.99.

(Beau Dure is a freelance writer and author who has published three books on soccer since leaving USA TODAY in 2010. He lives in Vienna, Va., where he has coached his two sons through the Single-Digit Soccer years. Follow his blog at sportsmyriad.com and catch him on Twitter: @duresport.)

referees, youth, youth boys, youth girls
5 comments about "When you disagree with volunteers and refs -- do so politely".
Read more comments >
Next story loading