FC Dallas set a record when it started five Homegrown players in its 3-0 win over the Columbus Crew last Sunday.

North Carolina native Jesse Gonzalez, who played for Mexico at this year’s U-20 World Cup, got his third straight start after making his MLS debut on Aug. 22. The 20-year-old launched his FC Dallas career five years ago with its U-15/16 Development Academy team.

Against the Crew, Victor Ulloa, 23, and Kellyn Acosta, 20, paired in the central midfield, while Coach Oscar Pareja started 18-year-old Coy Croft wide right and 17-year-old Alejandro Zendejas on the left side of the all-Homegrown midfield.

Last season, Ulloa, who was born in Mexico and grew up in the Dallas area, became the first Homegrown player in club history to play more than 2,000 minutes in a single season and this season he has started all 26 FC Dallas games. (Ulloa and fellow FC Dallas Homegrown player Moises Hernandez have been friends since attending Franklin Middle School together. Plano-born Acosta, who played for the USA at the 2013 and 2015 U-20 World Cups, made his MLS debut 10 days after his 18th birthday in 2013.

“It's huge for the club to see five Homegrowns starting, and one other one on the bench [Danny Garcia],” said Pareja after the 3-0 win over Columbus. “We have another one called into the national team [Hernandez with Guatemala]. So that makes us proud. At the same time, we needed to come here to a very difficult place and get a win in a game that will put us in a great spot. A big responsibility for these young guys, but they stepped up today.”

“The ability for the coaches in the academy to bring these guys up to us -- it's a very quiet job that they do there, and for me, it's easier when I see the talent there,” Pareja said. “So they make my life easier with all the work that they put together, and the coaching staff and the model of the team, and the FC Dallas initiative to develop players.”

In its first competition of a new cycle, the U-20 men’s national team -- comprised of 1997-born 17- and 18-year-olds – finished in sixth place at the Serbia-hosted Stevan Vilotic-Cele Tournament thanks to a 2-0 win over Israel in a placement game following losses to France (6-1) and host Serbia (3-1) in group play.

Real Salt Lake’s Sebastian Saucedo scored the USA’s only goal from the run of play, the Americans’ second against Israel after they took the lead through an own goal. Kyle Scott, who plays for Chelsea’s U-21, scored from the penalty spot in the loss to France.

An excerpt from "Das Reboot," Raphael Honigstein's book on the revival of German soccer that led to its 2014 World Cup win, reveals the influence of Dietrich Weise. Weise, who had been a federation youth coach in the late 1970s and early 1980s, returned to the DFB in 1996. He started off by visiting all the regional federations. He concluded that youngsters who didn’t happen to play for one of the professional clubs were falling through the cracks. Says Weise: “There were big differences as far as the federal associations’ ability to look after these kids was concerned. Some didn’t have the finances, some didn’t have the manpower. We thought that was unfair. Every kid playing in Germany should have the same opportunities. ... Our proposed first step was the introduction of a comprehensive talent-spotting and development scheme, with the help of a network of 115 regional centers. These were supposed to develop 13- to 17-year-olds. We also wanted to support the Landesverbände, so that they could work more regularly with the best 11- and 12-year-olds." “How German football rose from the ashes of 1998 to become the best in the world” 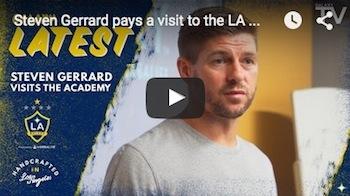 As the Los Angeles Galaxy opened its new high school program, Blended Learning Environment, the academy got advice from English star Steven Gerrard, who told them a cautionary tale about his upbringing. "I wish my qualifications were better," he said. "I wish I had another language to speak. So when I think of education, I never put enough in, and that's a regret I've got. From a football point of view, I’ve got no regrets." He added that he wished he had worked harder in the classroom: "I wish I was a lot more brighter than I am now." "Video Pick: Gerrard's cautionary tale for new academy kids"

Charlie Slagle, former CEO of North Carolina's Capital Area Soccer League (CASL) and Davidson College head coach, is the new executive director of the Colorado Rapids Youth Soccer Club (CRYSC), which serves about 6,000 players from ages 4 through 18 and has a partnership with MLS's Colorado Rapids. “Charlie is a rare youth soccer executive with business, programming and leadership experience at the highest levels,” said Peter Pak, CRYSC Board Chair, in a press release. "He moves seamlessly from national level committees to interacting with players and families."