Zidane the Younger gets a shutout as U.S. U-17s tie France

Besides tying the host, which took first place, Coach Richie Williams’ team tied 1-1 with Australia, which also qualified for the 2015 U-17 World Cup in Chile Oct. 17-Nov. 8.

In its final game, the USA beat French club Stade Rennais, 4-0. Joe Gallardo, who scored four goals at the Concacaf Championship, scored twice and notched one assist for the USA at the tourney.

WHY HE'S A KEEPER. Luca Zidane is the second oldest of Zizou’s four sons, all of whom play at Real Madrid, where Zinedine coaches the reserve team of his former club.

The eldest, Enzo -- named after Uruguayan legend Enzo Francescoli -- has played for his father on Real Madrid B. Luca, who started out at Marseille, got worldwide internet fame when during a penalty kick shootout at the U-17 European Championship he tried to emulate his father’s successful panenka during the 2006 World Cup final -- but shot too high. 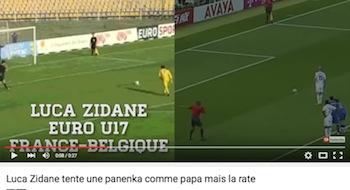 Luca did, however, end up the hero by making three saves as France beat Belgium in the semifinal before downing Germany, 4-1, in the final.

On becoming a goalkeeper, Luca told FIFA.com: “I always liked going in goal when I played with my brothers and my father when I was young. More than anything else, I didn’t want people to compare me to my father.”

France fielded its key players against the USA, including striker Odsonne Edouard, who scored a record eight goals in five games at the European U-17 Championship in May. France beat Australia, 6-0, at the Limoges Tournament.

FC DALLAS CHAMPS GET A TRIAL. Prior to the tournament in France, the U.S. U-17s finished seventh at the Vaclav Jezek International Youth Tournament in the Czech Republic. A trio of U.S. regulars returned to their clubs.

Christian Pulisic went back to Borussia Dortmund, where played the entire second half of the first team's friendly at second division St. Pauli in front of a crowd of 25,731. Alejandro Zendejas returned to FC Dallas and started in a 3-0 win over the Columbus Crew. Haji Wright returned to the New York Cosmos and was on the bench for its 2-0 loss to the Tampa Bay Rowdies.

Joining the team in France were four players who weren't part of the squad at the Concacaf qualifying tournament. They included Wisconsin product Luka Prpa, who is at the U-17 residency in Bradenton, Fla., and three members of the FC Dallas team that won this year's U-15/16 U.S. Soccer Development Academy national title: defender Reggie Cannon, midfielder Weston McKennie and striker Toshiki Yasuda.