In July, Massapequa Arsenal became the first New York team since 1959 to win the McGuire Cup, the U-19 boys national championship that launched in 1935. Massapequa Arsenal coach Tobias Bischof, who is also a Massapequa SC director and the associate head coach of the Hofstra University women's team, spoke with us about his coaching philosophy, the differences between coaching women and men, and how he'd like to see the American game evolve.

SOCCER AMERICA: Where are you from and how did you get involved with the sport?

TOBIAS BISCHOF: So I’m from Germany, from a little village called Winterstein. I played soccer as long as can remember in Germany.

SA: Did your family play soccer?

SA: What inspired you to start coaching?

TOBIAS BISCHOF: In the beginning, it was just to help out. I played on the first team and there were kids who had a trainer or a coach but needed more, so I helped out and I liked it, actually.

SA: Who are your coaching role models? 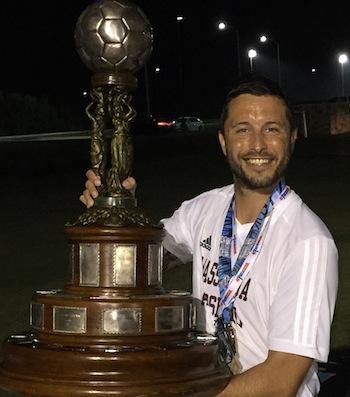 SA: What about your coaching style has changed since moving to the U.S. [in 2002]? Have you tried to be more intense or emphasize technique?

TOBIAS BISCHOF: I try to take what I brought from Germany to the U.S. and then make little adjustments. I try not to lose what I have, but try to become better and take the best out of both worlds.

SA: Is a focus on intensity an attempt to make up for a lack of a deep soccer culture?

TOBIAS BISCHOF: I definitely agree with that. The intensity here is a make up for the ... how do I say, the deeper knowledge of soccer. In Europe the game is lived more, the game is breathed more, kids watch soccer constantly and therefore learn about soccer constantly through not just training and coaching but through TV, radio and all those other outlets as well.

SA: What are the differences between coaching women and coaching men for you? 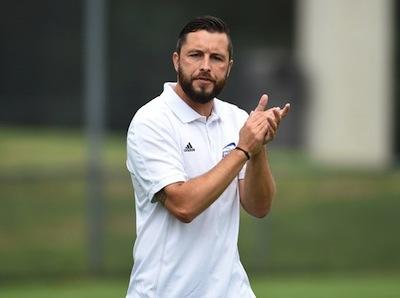 SA: How do you feel about the role of the American university system in developing women’s and men’s professional players?

TOBIAS BISCHOF: That’s a very interesting question. For me, I work with youth but I work with with a college program, too. In college it’s a different story. In college, people are called “student-athletes.” They are not “athlete-students.” That means school comes first and the athletic side is the second part of their life. Therefore it’s a little bit hard to use the American university system to actually develop professional players. To do that, the athletic side has to be a little bit stronger and has to take the main role for those student-athletes. It’s a very tough question.

I don’t want to say that the university system is “in the way” but there have to be adjustments to help develop professional soccer players in the U.S. There was a talk a year ago about changing, on the men’s side, the schedule from the fall being the competitive season for college sports to having it be a year-round season where you play in the fall and the spring.

SA: Interesting. But since the competitive season hasn’t changed and because you’re a college coach, how do you emphasize the balance between academics and athletics in your coaching? Do you let the players themselves handle academics without mentioning it?

TOBIAS BISCHOF: Well, what are we trying to accomplish here? For me personally, I would like to win championships. That’s always the goal as a coach. However, maybe my second and more important goal would be to develop a human, a player, a person. And therefore I have to make sure the kids who we have at Hofstra do the right things academically. We have a great support system here which I am involved in but I try to push our players to be the best athlete as well.

You do this in training by creating a competitive training environment, recruiting players who help our environment and help to fulfill our goals. At Hofstra the goal is to be a good student-athlete with a winning mentality and be ready to compete and do your best in everything, in life. It’s done by a lot of communication and by engaging with our players and trying to have them strive to reach their higher goals. And it’s also about trusting the people you work with to do their job.

SA: How do you address a player who suffers from lack of confidence?

TOBIAS BISCHOF: No. 1, you have to talk to your players from a young age. You have to make them believe that they can do it. An easy step to achieve that is to simplify the game for them. Give them little tips for what is easy for them to do on the field. Play quicker, fewer touches; it makes the game easier. Movement off the ball makes the game easier. If you address those little things, the game becomes easier for players, they are then more successful in their play and therefore they become more confident. 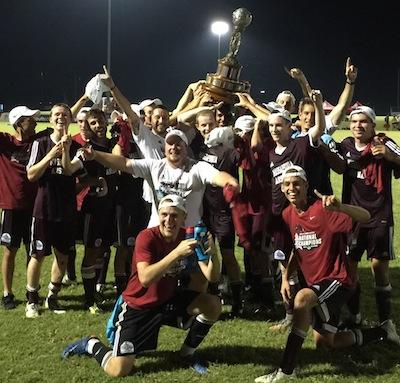 SA: What did you tell your U-19 boys at halftime before they won their title championship game [a 3-1 win over St. Louis Scott Gallagher]?

TOBIAS BISCHOF: We lost the first game of the tournament in the 93rd minute and the biggest challenge was focusing on what was ahead of us. Right after the game I got them together and I said to them right there, “The sooner you get over this loss, the quicker you give yourself a chance to get to the final and win the national championship.” And when we got back to the final, we were super prepared. Three minutes into the game we scored.

SA: If you had a magic wand, how would you improve American youth soccer?

TOBIAS BISCHOF: I just wish that MLS and the NWSL keep developing into the best leagues they can be and that our youth can, from an early age, want to be around the sport of soccer, drive to be the best soccer players they can be and have their ultimate goal be to become professional players. That would be my dream.