Seeing several players from the same state on a U.S. national team roster isn't surprising when they hail from California, which has the nation's largest population, nearly 40 million, and year-round soccer-playing weather.

But Colorado? That's a state of 5.6 million with a real winter.

Yet the current U.S. U-17 girls national team's 26-player roster includes six players from Colorado. Next is California with five. Florida, Virginia and Pennsylvania each have two players on the roster. (Interestingly, there are none from Texas, a traditional youth soccer hotbed and the nation’s second most populace state with 27 million.)

The Coloradans on Coach B.J. Snow’s most recent roster are Alexis Loera of the Colorado Storm, the Colorado Rush’s Coriana Dyke and Civana Kuhlmann, and a trio out of Real Colorado: Shae Holmes, Jaelin Howell and Sophie Smith.

“It is amazing when you compare the number of players you have out here compared to other states,” says Real Colorado executive director Lorne Donaldson. “There has to be something going on. I don’t think it’s anything special. The competition between players and coaches is high. We train at a high level. I think it’s a matter of coaches doing a good job.”

The weather is inconvenient, but may also instill fortitude in the players.

“We have a fairly long winter,” Donaldson says. “The kids are very resilient out here. They train in the cold. They’ll get out there no matter what the conditions. They’ll shovel the snow and train. I give the kids a lot of credit. They work at it. …

“We have some good days in the winter but we don’t have a lot of indoor facilities. There’s a good amount of FieldTurf in this area. If it was grass, we couldn’t get on it.”

Besides those players on the U-17 squad, Colorado is also home to the most promising female teen in the USA, Real Colorado’s Mallory Pugh, the 17-year-old who at age 16 started for the USA at the 2014 U-20 World Cup and leads the current U-20s who are aiming to qualify for the 2016 U-20 World Cup.

Lindsey Horan, 21, became the first American female to forgo college soccer and sign a professional contact in Europe when she went from the Colorado Rush to Paris St. Germain in 2012. She has made two appearances for the full national team.

“Another thing clubs here are doing – we do a good job of training them up,” Donaldson says. “Our younger kids, we train them with the older players. They don’t stay in their comfort zone.

The USA, which failed under Snow to qualify for the 2014 U-17 World Cup, will compete at the U-17 Concacaf Championship in Grenada next March to earn one of Concacaf’s three spots at the Jordan-hosted U-17 World Cup in September of 2016. 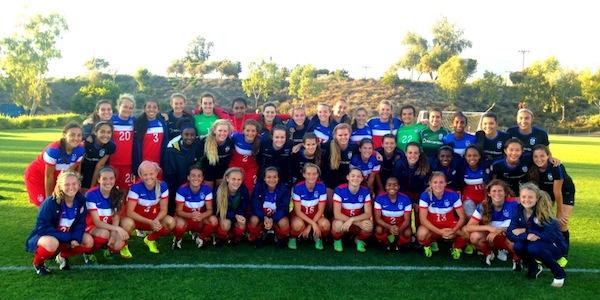 Coach Michelle French has named a 24-player roster for a Sept. 19-25 training camp in San Pedro Sula, Honduras. The team is preparing for the the 2015 Concacaf U-20 Women's Championship in Honduras in December from which three teams will earn spots at  2016 U-20 Women’s World Cup in Papau New Guinea.