Joe Morrone did it all

By almost any measurement, soccer is big these days, but it wasn't always like that. The periods of the greatest growth were in the 1960s and 1970s as spurred on by the introduction of the pro game, soccer took off at the youth and then college levels.

Those who had the greatest impact did it all, organizing the first youth clubs and getting college programs off the ground. For many of these pied-pipers, like the British players who came over to play in the NASL and settled in communities across the country, soccer had always been their entire life.

Others, like Joe Morrone, came late to the sport.

"I think the first time I saw a soccer game, I was playing in it," Morrone said earlier this year in an interview with Jeff Jacobs of the Hartford Courant. "My technical skills weren't good and neither was our team."

Morrone was in college then, attending the University of Massachusetts. Growing up in the 1950s in Worcester, Mass., he didn't play soccer but he played everything else, baseball, basketball, football and ice hockey, all the American sports. He played baseball at UMass, becoming a lefty when he hurt his right elbow. He later played lacrosse at UMass and that led to a job right out of college coaching lacrosse and soccer at Middlebury.

Morrone always looked a little out of place in the world of soccer. He was famous for the clipboard he carried around, like a football or basketball coach might carry. He says he carried it around because he could use it to get his aggression out. Breaking a clipboard over his knee after a tough loss was safer, he quickly found out, than putting his fist into a wall.

Morrone's tactics -- gimmicks, you might say -- were straight out of American sports. He was derided for the "corner stall," his version of basketball's four corners, to kill the clock at the end of the game. He'd have players take throw-ins from their knees until that stunt was outlawed. How was that possible in the first place? College soccer rules have always been different than FIFA rules.

Morrone knew little about soccer when he started, but he learned and he innovated. He was one of the first college coaches to venture overseas, one of the first to develop drills for goalkeepers and one of the first to put these drills on film, thanks to a government exchange program that landed him in Poland in the mid-1960s. He started an offseason indoor program at UConn.

Morrone said when he started coaching at UConn in 1969 there might be a half dozen fans at its games -- and that included his wife, Elizabeth Ann, and three children, Melissa, Joe and Bill. By the early 1980s, UConn had a soccer stadium with bleachers and a scoreboard, and the Huskies packed the place. There was a boosters club, and there were media, lots of media. Many of the small papers across Connecticut covered UConn soccer home and away. Morrone introduced "Soccer Sunday." Before then, college teams rarely played on Sundays. Total attendance in 1983 was 64,535 -- an unofficial NCAA record that held until 2010 when UC Santa Barbara drew 70,471 fans.

The Huskies weren't very good that first year -- they went 3-9-0 in 1969 -- but they got better. And they got better players. Morrone was one of the first coaches to aggressively recruit in the ethnic leagues of New York and Connecticut, and he landed players like Haitian-American Frantz Innocent, Erhardt Kapp, who was born in Romania and grew up in Germany, and Pedro De Brito, who was born in the Cape Verdes Islands. UConn went on to win a national championship in 1981.

Later, as other programs, particularly in the ACC, modeled Morrone's recruiting and build up their facilities, it became harder for Morrone to recruit as some players were turned off by his old-school methods. Leaving wasn't easy -- he was pushed out -- but when Morrone retired after 39 years of coaching at Middlebury and UConn, he had a career record of 422-199-64. He stayed at UConn, teaching in the Department of Kinesiology until 2014. 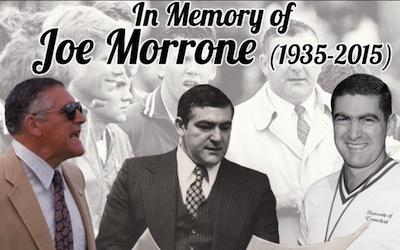 But Morrone's influence on soccer extended far beyond UConn. He started the Mansfield Soccer Club and along with Alistair Bell got the Connecticut Junior Soccer Association off the ground in 1972. Morrone's sons, Joe and Bill, both U.S. youth internationals and college stars, played at Mansfield Soccer Club, though its most famous alumnus is U.S. Soccer president Sunil Gulati, who then got his start in administration working with the CJSA in its ODP program.

Morrone was president of both the NSCAA and NISOA, the only person to head both the national coaches and referees associations. In 1991, Soccer America named Morrone one of the 20 most influential people in American soccer over the previous 20 years, the first 20 years of its existence.

He didn't know it at the time, but Morrone had a big impact on Soccer America's existence as well. Soccer America founder Clay Berling tells the story of being ready to pull the plug in the early 1980s when out of the blue he received a letter from Morrone, telling him how important Soccer America was to the burgeoning soccer community and that he valued what Soccer America was doing. There was no way Berling could give up, and soon Soccer America started to grow. Berling received the NSCAA Honor Award in 1996, a year after Morrone was the recipient.

Morrone passed away at the age of 79 on Thursday morning at his home in Mansfield. He had pancreatic cancer and was told in May he had three months to live. He lived four months, long enough to watch the start of a new college season in Storrs.

Sunday night, UConn played UCSB -- the school that broke UConn's attendance record -- in the rain at Morrone Stadium. The Huskies, who had not scored at home in four games, trailed 1-0 with 10 minutes to play in the second half when they rallied to score two goals and win, 2-1. The UConn players ran over to celebrate with Morrone, seated in a wheelchair.

"I told the guys before the game, 'If we're going to win, this has to be for Coach Morrone," UConn junior Kwame Awuah told the Courant. "Nothing here would be [here] without him -- field, everything."

Yes, Joe Morrone did it all.

college men
6 comments about "Joe Morrone did it all".
Read more comments >
Next story loading

More from College Soccer Reporter
This is your last free article! Special Offer: Unlimited access for 50¢!