USA suffers major rout against Germany at U-19 men's tourney

While seven of the graduates of the last cycle of the U.S. U-20 men's national team, which reached the quarterfinals of the 2015 U-20 World Cup in June, have helped the U.S. U-23 national team to within a win of qualifying for the 2016 Olympic Games in Brazil, the new cycle of U-20s has had an inauspicious start.

During their first gathering, in September, the new U-20s -- comprised of 1997-born 17- and 18-year-olds -- finished sixth place at the Serbia-hosted Stevan Vilotic-Cele Tournament with a 2-0 win over Israel after losses to France (6-1) and host Serbia (3-1).

The second trip, competition in the U-19 division of the Mercedes-Benz Elite Cup in Stuttgart, began on Tuesday with an 8-1 loss to host Germany, which also fielded all 1997-borns. The Americans were down 2-0 at halftime and trailed 7-0 before Eryk Williamson scored their lone goal. Germany scored two of its goals while playing a man-down following the 74th minute ejection of Lukas Boeder.

Jonathan Klinsmann started in goal for the USA at the game in Stuttgarter Gazi-Stadium, home of the Stuttgart Kickers where his father, Jurgen Klinsmann, began his professional career before moving on to VfB Stuttgart.

These are early days, of course, for the current cycle, which aims to qualify for the 2017 U-20 World Cup.

* The 2015 U-20 World Cup players currently playing for the U.S. U-23s, who can clinch an Olympic spot with a win in the Concacaf Championship semifinals on Saturday, are goakeeper Zack Steffen, defenders Cameron Carter-Vickers and Matt Miazga, and midfielders Emerson Hyndman and Gedion Zelalem, and forward Maki Tall. Goalkeeper Ethan Horvath would have been Steffen's backup at the U-20 World Cup but wasn't released by his Norwegian club, Molde.

... The US Youth Soccer Show features the Houstonians Soccer Club, which was founded in 1996 as the first inner-city program fully funded by the City of Houston. Last summer, the Noe Bastidas-coached Houstonians 2001 won the U.S. Youth Soccer U-14 boys national championship. 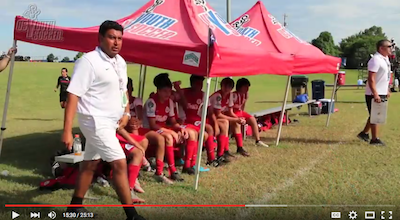 ... The Washington Post's Michael S. Rosenwald reports that the number of children playing team sports is falling, with experts blaming a parent-driven focus on elite travel clubs, specialization in one sport and pursuit of scholarships for hurting the country’s youth sports leagues. Are parents ruining youth sports? Fewer kids play amid pressure

... Martha Ross of the Bay Area News Group looks at all the angles of the debate on so-called participation trophies that was sparked when Pittsburgh Steelers linebacker James Harrison posted on Instagram a photo and message saying he had taken away the trophies given to his 6- and 8-year-old football-playing sons. Should kids in sports get trophies for just participating?

... Thirty-three of the 48 Powerade Sueno Alianza finalists received a total of 116 trial invitations from Liga MX and Colombian Liga Dimayor clubs, and from the national team programs of the USA and Mexico. The finalists at the Sept. 30-Oct. 3 event in Miami had been chosen from tryouts in 11 U.S. cities across the USA that were attended by more than 7,000 players. See the list of players and the clubs HERE.