Black Saturday isn't the only reason why Klinsmann's time is up

It was Black Saturday for the USA. Mexico thoroughly outclassed Jurgen Klinsmann’s team after the U.S. U-23s, aiming to qualify for the Olympics, got schooled by Honduras. 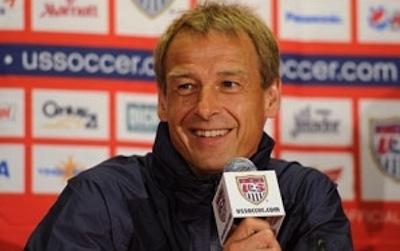 As Technical Director, Klinsmann should have interest in developing American coaches. If he prefers to appoint foreign coaches, they’d better be fantastic, yet now the USA is in danger of not qualifying for the Olympics. Even if it beats Canada on Tuesday, it must still defeat Colombia to qualify for the Rio 2016 Games.

It was actually a bad week for the U.S. national team program that Klinsmann insisted on having complete control over. It started on Tuesday when the U.S. U-20 national team fell to Germany, 8-1, in Klinsmann’s hometown of Stuttgart. On Saturday afternoon, Herzog got ejected during his team’s dismal performance in a 2-0 loss Honduras. In the evening, Klinsmann’s own team delivered a dour brand of defense-minded soccer while losing a chance to go to the 2017 Confederations Cup in Russia.

That latest Klinsmann failure comes after another major disappointment -- a fourth-place finish on home soil at the Gold Cup, a tournament Klinsmann said “is very, very important to us.”

So, just within the last couple of months, Klinsmann’s team failed at the very important Gold Cup and the crucial Concacaf Cup while U.S. U-23s struggle in the hands of his appointees.

But it’s not just the recent results that indicate the national team should no longer be run by Klinsmann. Remember the 2014 World Cup?

It was in qualifying play for Brazil 2014 when the USA last played Mexico in official competition. The USA won, 2-0, on Sept. 10, 2013. Landon Donovan scored and assisted as the USA clinched a spot at the 2014 World Cup.

Then Klinsmann dumped Donovan, the greatest player in U.S. soccer history, from the World Cup squad.

Klinsmann brought to Brazil an injured Aron Johannsson and lost another striker, Jozy Altidore, 20 minutes into the first game. With the USA’s top scorer and assist record-holder left home, the USA finished no better than four years earlier under Coach Bob Bradley and not as good as in 2002 with Bruce Arena.

The way Klinsmann’s team plays, it’s not even up to the standard he aimed to reach. When he was hired and asked about striving for an American style of play, he said "you would like to impose a little bit the game on your opponent instead of sitting back and waiting for what your opponent is doing and react to it."

Six months into his tenure, he said, “We are moving away from a reactive style of play to a proactive style. We want to play with the big teams; we want to take on the bigger nations and play like they play.”

On Saturday, Klinsmann’s team took to a new depth “sitting back and waiting.” It's not just about Saturday. The USA played “reactive” soccer throughout the 2014 World Cup but also for much of the 2015 Gold Cup, where the USA was outshot by Honduras, Panama and Haiti (75-25).

The gamble U.S. Soccer took on hiring Klinsmann is clearly not paying off.

Gamble? That’s right, because there was nothing in Klinsmann’s coaching history to justify the great expectations many had for him.

Remember, he coached only twice before. He didn’t last a season with a Bayern Munich that was defending Bundesliga champion when he took over. The other stint was taking a traditional world power to a third-place World Cup finish on home soil in 2006.

Those who try describe Klinsmann's stint at Germany's helm as a great accomplishment will point out that Germany was in crisis, having been eliminated in the first round of the European Championship two years earlier. They forget that Germany was eliminated from the 2000 European Championship but finished runner-up at the 2002 World Cup in Japan, with Coach Rudi Voeller at the helm. And they forget Germany faced only one tough opponent (Argentina) before losing to Italy in the semis in 2006.

But Klinsmann -- a World Cup-winning player who chose California as his home -- was for some an enticing choice for a national team that seemed to have been stuck on a plateau. Nothing wrong with rolling the dice, but you gotta know when to cut your losses.

As Technical Director, Klinsmann has likely lost the faith of the American coaching community that has witnessed his affinity for imported coaches and foreign-raised players – besides witnessing how poorly Klinsmann’s team has been playing.

As U.S. coach, he’s failed in four years to lift the team higher than his predecessors and within the last few months presided over a disconcerting decline. The usual solution in the soccer world, when a team is in such a rut, is to change the coach. Especially when you can’t point to any evidence that he has the potential to get more out of his players.