Another USA-Mexico thriller -- in Germany

Two days after the thriller at the Rose Bowl in which Mexico prevailed, 3-2, over the USA to earn a 2017 Confederations Cup berth, the USA and Mexico faced off in Germany in the U-19 division of Mercedes-Benz Elite Cup.

Both games had a Klinsmann involved -- Cal's Jonathan Klinsmann started in goal for the U.S. team, comprised of 1997-born players aiming to be part of the next U-20 national team cycle -- and both were action-packed battles in which Mexico took an early lead and the USA responded swiftly.

Nine minutes after Mexico struck first in the ninth minute, the Chicago Magic's Emmanuel Sabbi finished off a cross from University of New Mexico defender Aaron Herrera. Unlike in Pasadena, it was the USA that took a 2-1 lead, Sabbi in the 51st minute serving up Mukwelle Akale, a Minnesota product with Spain's Villarreal. The Mexicans equalized on a Jorge Duran of a header and took a 3-2 lead in the 83rd minute.

But this 3-2 Mexican lead didn't stand, thanks to Akale converting a stoppage-time penalty kick awarded for a Mexico handball.

The game was the USA's third and final of the tournament, after a 2-2 tie with Scotland and an 8-1 loss in its opener against host Germany. Akale finished as the USA’s top scorer, having also struck against Scotland.

The USA was coached by Omid Namazi.

Coach Richie Williams and his squad arrived in Chile on Monday for the U-17 World Cup that kicks off on Saturday, when the Americans meet Nigeria in Santiago. NBC Deportes is airing all 52 of the tournament's games. 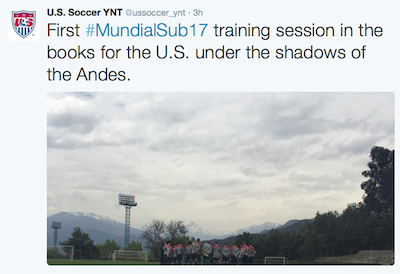 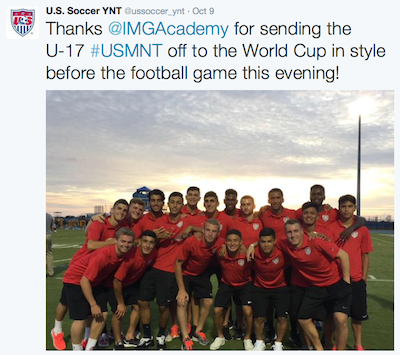 The U-18s are coming off a trip in August to Mexico City where they drew and lost to the Mexico U-20s.

The team will play the San Diego Sea Lions of the W-League on Oct. 24 at 6 p.m. at Cathedral High School.

The youth program of Atlanta United, which begins MLS play in 2017, will join the U.S. Soccer Development Academy in the fall of 2016, partnering with local and regional youth soccer clubs.

Georgia currently has two Development Academy clubs, Concorde Fire SC and Georgia United Soccer Alliance (GUSA). Concorde Fire will continue as an Academy member club in all age categories. GUSA will continue fielding a U-13/14 team but its older teams, U-15/16 and U-16/18, will merge with Atlanta United.

Atlanta United President Darren Eales said in a U.S. Soccer press release that Georgia United’s approach in developing youth talent “is superb and innovative” and Atlanta United will build upon the success of the GUSA model that consists of a structured alliance of six metro Atlanta clubs.

Georgia United was the only non-MLS club to send a team to the Development Academy semifinals last season at either age group. Since joining the Development Academy in 2011, Georgia United’s teams have made the playoffs at both U-15/16s and U-17/18s each year until the U-18s came up short last season. (The U-13/14 division does not have playoffs.)

Atlanta United Academy players will train at a new training facility due to be completed prior to the club’s first match in 2017.