The U.S. Soccer Development Academy is undergoing a second major expansion since its founding in 2007, when clubs competed in the U-15/16 and U-17/18 age groups.

"We are very excited to expand and introduce the Academy structure and philosophy to the U-12 age group when players are in their peak learning years," said U.S. Soccer Youth Technical Director Tab Ramos. "That age represents a critical stage in a player's growth, and this move represents another important step in our expanded efforts to improve elite player development."

On creating a U-12 and U-13 division, U.S. Soccer Director of Scouting Tony Lepore said "This will improve the overall environment at an earlier development stage and help clubs create a more consistent step-by-step pathway for players to learn.”

U-12s will play 9v9. Each club will field two teams, with a maximum player pool of 26 players and fluid game-day rosters so that different combinations of players can be used week-to-week. Re-entry, not allowed at the older age groups, will be permitted at U-12s but coaches will be limited on how often they can interrupt the game to make substitutions. Teams are to train at least three days per week and have a minimum of two rest days, with one game per weekend during competitive periods.

The Academy aims to limit travel to 1.5 to 2 hours. The U-12s will play a nine-and-a-half-month season that includes January-February futsal.

All current Academy clubs will add U-12s. The application deadline for new U-12 clubs is Nov. 6. 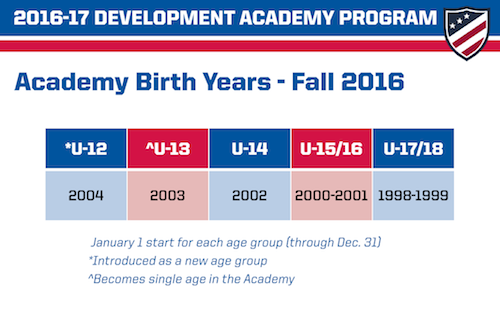 “When we looked at it and did the map, there’s no exact number [of how many U-12-only clubs will be added],” said Development Academy Director Jared Micklos. “But I can see it being a number that could have the addition of 30, 40, 50 clubs, if needed. It will depend on the interest that comes in and making sure that we’re selecting clubs for the purposes of localizing our programming and for quality player pools.”

Will Academy expansion into U-12s make it more or less expensive for that age group's elite players?

“The U-12 level will not have a lot of costs associated with it,” said Micklos. “It depends on what environment they’re coming from, but our goal and our hope is that costs will be reduced for players.”

Micklos points out that U.S. Soccer covers event fees, and web site and programming fees. And by limiting travel and not having overnight trips at U-12s, costs could be less compared to non-Academy teams that travel frequently to tournament play.