There's a chance that the USA faced the strongest team, based on history and Saturday's performance, at the U-17 World Cup when it fell, 2-0, to Nigeria in the Group A opener in Santiago, Chile.

Nigeria is defending champion, a record four-time winner of the U-17 World Cup, and three-time runner-up.

The USA had a promising start to the game with Christian Pulisic orchestrating from the left side, but well before the first half hit the halfway point, Nigeria found its stride and dominated for the rest of the game. The Golden Eaglets outshot the Americans 19-5 while the USA failed to force a save from Nigeria goalkeeper Akpan Udoh. 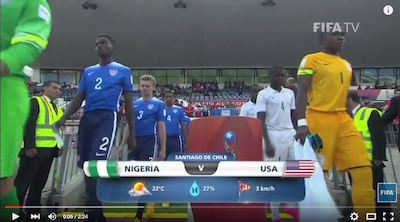 Coach Richie Williams' team did survive the onslaught until the 50th minute, when defender Austin Trusty botched his attempt to clear a cross from John Lazarus, setting up a close-range blast into the net from Chukwudi Agor.

Eleven minutes later, Agor headed an up-the-middle U.S. goal kick to Victor Osimhen, who shook off a challenge from U.S. captain Hugo Arellano before stroking the ball past U.S. keeper Will Pulisic.

Trusty, the only field player added to the squad that Williams used at the qualifying tournament in March, was ejected in the 87th minute.

Nigeria was denied a bigger win by U.S. keeper Pulisic, giving the USA a silver lining of not entering its final two Group A games with a worse goal differential. The top two finishers and best four third-place finishers of the six groups earn second-round passage.

"We are obviously disappointed because of the outcome," U.S. coach Williams told FIFA.com. "We played a good first half, we were balanced, solid and we even created some chances that we were not able to convert. Nigeria scored two quick goals, but thanks to unfortunate errors on our side. We were hoping to be more effective, but we lost against a good Nigerian team."

Nigeria coach Emmanuel Amuneke said, "Considering it was the first match, I think it was a good game. At the beginning it was pretty even, everything very tactical, neither of us wanted to make a mistake. At halftime I told my players to believe in themselves, and it worked, because we were more precise. Besides the three points, which are very important, I also liked that we kept our heads even when we could not get things going."

In the other Group A opener, host Chile settled for a 1-1 tie with Croatia, the USA's next opponent Tuesday (4 p.m. ET, FOX Sports 2 and NBC Universo).

El TRI OPENS WITH BIG WIN. Mexico, runner-up at the last U-17 World Cup and champion in 2011 and 2005, opened with a convincing 2-0 win over Argentina on goals by Kevin Magana and Eduardo Venegas. Abraham Romero, a Southern Californian who plays for the Los Angeles Galaxy's U.S. Soccer Development Academy team, started in goal for Mexico. 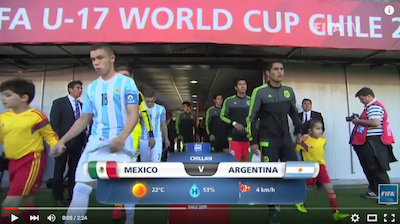 The U.S. U-20 women's national team, which is preparing for December's qualifying tournament for the 2016 U-20 World Cup,  is training in Madrid Oct. 19-29. U.S. coach Michelle French took a squad 21 players.

The two collegians in the squad are goalkeepers Rose Chandler and Samantha Leshnak, currently back-ups at Penn State and North Carolina, respectively.