The National Women’s Soccer League will expand to 10 teams in 2016 with the addition of the Orlando Pride, owned and operated by MLS’s Orlando City SC. The Pride has named as head coach Tom Sermanni, formerly U.S. and Australia women’s national team coach.

“Orlando is a remarkable organization with an authentic club culture and a community that will help us continue to grow the league and provide more opportunities for female soccer players at the highest level,” said NWSL Commissioner Jeff Plush.

Sermanni, who most recently served as Canada assistant coach during the 2015 Women’s World Cup, complied a 17-2-4 win-loss-tie record at the U.S. helm during a 15-month stint before being replaced by Jill Ellis in April 2014. He coached Australia to Women’s World Cup appearances in 2007 and 2011. He coached the New York Power of the Women’s United Soccer Association in 2002-03. 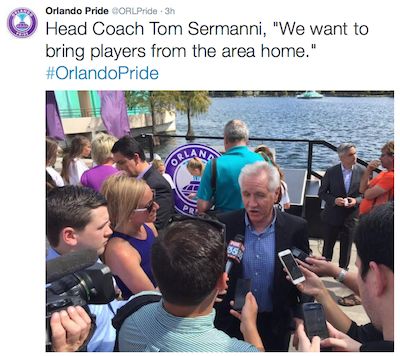 “Orlando has proven itself as a hotbed of soccer in the country and I look forward to building on that legacy of success with the Orlando Pride,” said Sermanni in a press release.