It's difficult to imagine the USA going far at the U-17 World Cup based on their second-half performance on Tuesday against Croatia, which overcame a 2-0 halftime deficit for a 2-2 final score that flattered the Americans. But, despite opening with a 2-0 loss to Nigeria, the USA has a clear path to the second round -- beating host Chile on Friday.

Since the biennial U-17 World Cup expanded from 16 to 24 teams in 2007, the top two finishers of the six groups qualify for the second round along with the best four third-place finishers, and never has a team failed to advance to the knockout stage with four points. A win over the Chileans would give the USA four points. A loss and Coach Richie Williams' team will be the first U.S. squad to exit in the group play since 2001. (Williams failed to qualify the USA for the 2013 U-17 World Cup.)

How lucky was the USA to escape with a tie on Tuesday? Croatia hit the post three times, including twice in stoppage time, after Luka Ivanusec scored the 2-2 equalizer in the 77th minute. 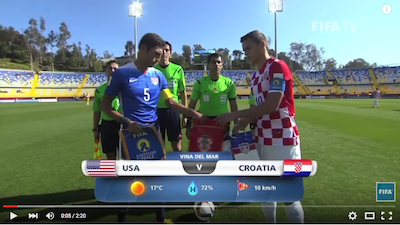 In a first half, Croatia threatened mainly with long-range shots handled by U.S. goalkeeper William Pulisic, and the Americans went ahead on goals in the 20th and 40th minutes. Christian Pulisic was instrumental in both.

While the USA managed a slight edge (53%-47%) in first-half possession, the second half was stunningly lop-sided in Croatia’s favor.

"I can't explain what happened in the second half," Williams said in the postgame press conference. "In the first we scored twice and had some other chances, but above all we were able to keep control of the ball. I don't think my players were overconfident at 2-0, but they lost their composure: you can't defend a whole match against a team as good as that and who put that much pressure on you like Croatia. At the end, not everything is bad, we have one point and we can still advance."

Croatia continued to its torment of the U.S. defense, especially on right back Tyler Adams’ side, from where Josip Brekalo broke through to lay on a ball that Ivanusec struck into the net from 19 yards.

Can this U.S. team beat the Chileans? The hosts tied Croatia, 1-1, in their opener, but weren't outplayed like the Americans. Chile matched the Croatians in scoring chances and had more possession. The Chileans will have 20,000 home fans behind them. But also lots of pressure. After falling 5-1 to Nigeria on Tuesday, Chile too needs a win to avoid ouster.

Croatia coach Dario Basic: "If you offered the draw at halftime, I would have taken it. But after how we played the second half, we deserved the victory. In the first half we defended poorly and they scored two goals out of three shoots, but we had our chances. Then we asked for the heart of our players and they responded with personality and also with talent. Either you believe or not in luck, today it was not on our side." -- FIFA.com

U-17 World Cup: TV Schedule & Results
Brazil, the second most successful nation at the U-17 World Cup with three titles to Nigeria's four, recovered from its 1-0 opening loss to South Korea with a 1-0 win over England, which started with a 1-1 tie with Guinea. ... Two-time U-17 World Cup champion Mexico, which opened with a 2-0 win over Argentina, faces Australia on Wednesday (3:30 pm ET, Telemundo, FS2).