Right back Eric Lichaj scored Nottingham Forest’s goal in a 1-1 tie with Burnley – his first goal since joining Forest for 2013-14 season.

Lichaj’s goal, who was also yellow-carded, last scored a league goal in March 2012, for Aston Villa in a 4-2 loss to Chelsea. 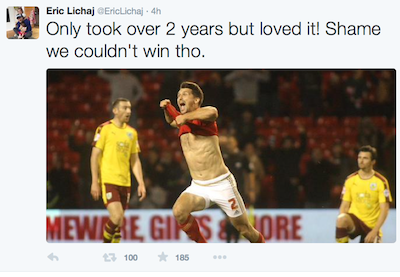 The tie kept Nottingham Forest in 15th place of the English second division.

Jonathan Spector came on for second-place Birmingham in the 83rd minute of a 1-0 win at Bolton.