A regular-season title and the USL championship merited the selection of three Rochester Rhinos to the All-League First Team.

Midfielder and captain Tony Walls scored four goals and registered two assists while leading the Rhinos in minutes played. Goalkeeper Brandon Miller and centerback Grant Van De Casteele were honored for their work in a record-setting defense that allowed just 15 goals in the regular season. 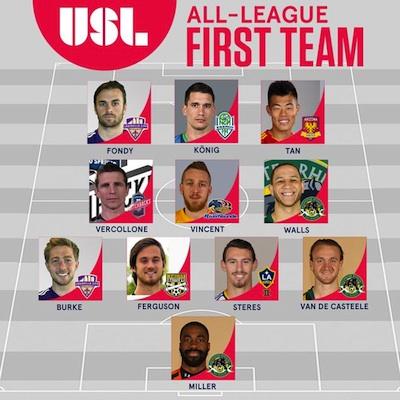 Louisville City FC claimed two spots on the first team: defender Bryan Burke, who led the league with 10 assists, and forward Matt Bondy, who set a league record by scoring 22 goals. Six teams were each represented by one player.

The league will also announce its major awards this week, starting with the Goalkeeper of the Year on Monday.

Here are the All-League selections tabulated by voting in a poll of team officials and independent media members: