'The ball is ever-present': Increasing the physical demands of a common tactical exercise

Every activity we set up contains a physical element -- and for this reason contributes to our players’ development of fitness and athleticism. When I worked as an assistant coach for Bob Gansler with the Kansas City Wizards (now Sporting KC) one of his many sayings that have stuck with me was: “the ball is ever-present.” This applies to the youth coach just as it does the professional player, and moves beyond the simple application of “fitness with the ball.”

So, just as we enter a training session with technical and tactical objectives, we must recognize the physical components that drive the players’ success in these activities, and how these activities contribute to their physical development. Similarly, just as we problem-solve the technical and tactical weaknesses of our team, we should be problem-solving physical elements of their performance. The simple goal of this more comprehensive and detailed approach is to increase speed of play -- the gold standard for us as coaches.

This has led me to a phrase that is very prominent in my lectures for USSF coaching courses -- “Every activity has a physical element, but not necessarily a fitness element.”  To illustrate this premise I’ve chosen a common tactical activity used by many coaches, an 8v6 activity designed to develop attacking play. By making slight changes to an exercise’s structure, we are able to make it increasingly physically demanding, in other words have a higher fitness element, while maintaining its tactical focus. Progressively, Activity 1 is designed to have the lowest physical demand with Activity 3 having the greatest physical demand. All activities are designed to maximize speed of play and tactical development.

1. In this 8v6 structure the attacking team works for a prescribed number of repetitions, with a recovery interval relative to the duration of each repetition (e.g. a repetition lasting 45 seconds may only require 30 seconds recovery vs. a 2 minute repetition may require a 1:15 minute recovery). As the primary objective is attacking play, the quality of each attacking repetition is the emphasis. This also optimizes player energy to focus specifically on attacking play. Multiple elements play into this. The first is, that by prescribing the activity via a specific number of repetitions, the level of focus on quality attacking opportunities is increased. The second is that in this structure, a loss of possession by the attack terminates the repetition. By limiting transition, the coach is maximizing player energy (both attacking and defending players) on the training objective -- attacking to penetrate the final 1/3. Third, the coach has increased control of the recovery intervals between each repetition and in this way can ensure maximal recovery of the players between each repetition, resulting in quality repetitions throughout the activity. 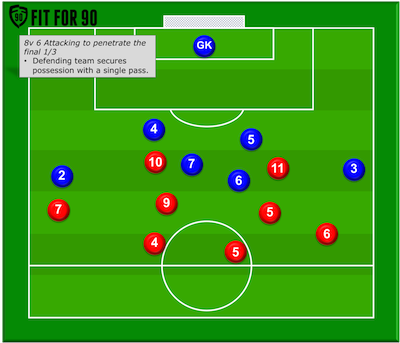 2. In this subtle progression from our original structure, transitional play for the defending team is introduced. This is more realistic to the game environment, but also increases the physical demands placed on the players through both a longer action, as well as a slightly higher intensity for both defending and attacking teams. Specifically, the attacking team must transition to defend immediately, while the defending team is transitioning to play in a disadvantaged 6v8 scenario and thus must play at a higher tempo/intensity. The team of 6 must possess the ball into one of the two red zones. The result is a relatively longer and higher intensity action. In prescribing this activity, the coach may prescribe activity using either a finite number of repetitions, or exercise duration. It is important, that if repetitions are used, that the coach monitors the duration of each interval. A concern is that play can continue for long intervals with neither team finding success (scoring). The result is that an activity that is purposefully designed for develop quality tactical actions will begin to fatigue the players. As a result the play will slow, leading to a sub-optimal training activity. 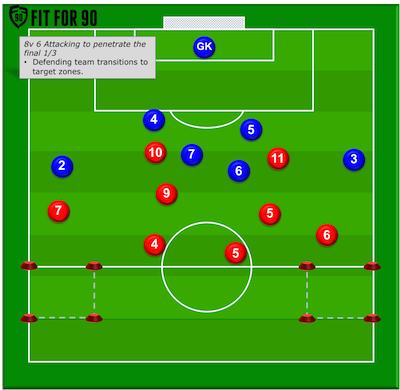 3. The final progression is the highest in demand. The defending 6 now transition to play to 2 target players, when one target receives the ball it is transitioned to the opposite side target player, who then plays back into the attacking team (reds), and the defending 6 (blues) transition to defend – shifting with the change in the point of attack. The result of this structure is a more continuous activity that is delivering the greatest overall physical demand, delivering both a higher intensity and longer and more continuous play. The duration prescribed is specific to the team’s fitness level. As the exercises objective is primarily tactical, it is best to be conservative. Typically a work duration from 2 to 5 minutes, with a recovery duration of 1.5 to 3 minutes. 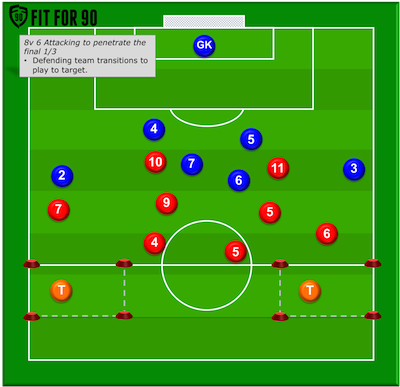 In each of these instances, it is important to consider that there is a higher physical demand placed on the defending group of 6 vs. the attacking 8. This is the result of two primary components. First, the numerical advantage of the 8 attackers results in them working at a slightly lower intensity, performing generally fewer actions per player than the 6 defenders. Second, the physical demands of defending are generally higher than those of attacking. This is the result of actions typically involving both an acceleration and deceleration component to close, or deny space to the attacking team.

The combination of these elements means that as coaches develop their training plan, the physical prescription must be made for the defending team, and not the attacking team to ensure the quality of the activity. For instance if the prescription is wrong, as the defending team begins to fatigue, their speed of play will diminish -- the result is a false sense that the attacking team has improved. In reality, their success is not driven by improvement, but by them playing against lower competition – the product of fatigue.

Over time, the result of the coach getting the exercise prescription correct is three-fold:
1) Comprehensive integration of the “four pillars” (technical, tactical, physical, & mental) results in higher quality training.
2) A more detailed exercise prescription of each training activity results in higher quality training activities.
3) Continuous focus on quality and speed of play builds player fitness while minimizing the risk of over-training and corresponding injury risk.

Why should you care about sports science?

Why no laps -- and other fitness & health insight

(John Cone has a Ph.D. in kinesiology, an M.S. in Exercise Physiology and extensive licenses and certifications, including his USSF A. Dr. Cone is a USSF national instructor delivering sports science education on coaching licenses from the F license to the A license, and youth-specific Academy Director course. He was formerly the Director of Sports Science with the Portland Timbers in the MLS, and an assistant coach with Sporting Kansas City (nés Wizards). Dr. Cone has worked at every level of the game from youth through professional as a coach, and as a sports scientist. Through his company Fit for 90, Dr. Cone delivers sports science consulting, and player monitoring for performance, development, and injury prevention. Fit for 90 clients include the U.S. women’s national team, numerous MLS, NASL, NWSL, collegiate, ECNL and USSDA teams. Fit for 90 is the official player monitoring system of US Club Soccer and the ECNL.