One of my favorite soccer memories: I was 13, sitting next to my grandfather who was visiting us from Germany, in Aloha Stadium watching Team Hawaii play the Las Vegas Quicksilvers.

I noticed that Opa, not a man prone to demonstrating excitement, was practically giddy.

“Michael, that’s Eusebio!” he said. “The world’s best player ever besides Pele. … See No. 5? That’s Wolfgang Suhnholz. He played for Bayern Munich!”

This was in 1977. After the North American Soccer League had so much success in many parts of the country, it started franchises in the middle of the Pacific and in the middle of desert -- when Vegas was a third the size it is now, had never had major league sports, and no soccer culture.

“What the hell were they thinking?” writes Ian Plenderleith in “Rock 'n' Roll Soccer: The Short Life and Fast Times of the North American Soccer League.” After one season, The Quicksilvers moved to San Diego and Team Hawaii became the Tulsa Roughnecks."

Reckless expansion was of course a main factor for the demise of the NASL, which folded after the 1984 season.

But, boy, am I thankful that the NASL did some crazy stuff. Not just because of the memory of seeing my grandfather so delighted, or because I got to watch Pele play, or had Team Hawaii players visit my school.

The NASL inspired the generation of players who made the U.S. national team respectable, like New Jersey boys Tony Meola, John Harkes, Tab Ramos and Claudio Reyna, who went to New York Cosmos games. It spread the seeds that led to soccer’s current state -- neck and neck with basketball as the most popular team sport among American children.

“In 1967, 12,000 schoolchildren went through the [Atlanta] Chiefs soccer clinics, while 42 area high schools had begun to play the game,” writes Plenderleith. 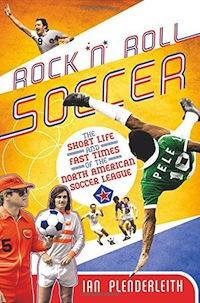 But what Plenderleith does most expertly -- and is previously less covered than NASL grassroots’ impact -- is show the NASL’s impact on the global game, and how some of that stuff doesn’t seem so crazy in hindsight.

“Old World” soccer purists may have mocked halftime armadillo races, players entering the field on Harley-Davidsons, or the San Diego Chicken doing a pirouette, flopping and playing dead next to a fouled player. (Minnesota Kicks coach Geoff Barnett: “The referee goes nuts and comes over to me shouting, ‘Get that f****** chicken off the field!”)

But as Plenderleith writes, the NASL was “a league that got too much right to ignore.”

“The NASL introduced the idea that a soccer game could be an event and a spectacle, not just two teams meeting to compete for points. You weren’t herded into the stadium by policemen waving wooden batons. You were a customer …”

Some of the “manufactured atmosphere” -- which could also be considered “marketing techniques aimed at wooing a new generation of fans” -- may have been over the top. But …

“Once the game started you could watch a version of soccer easily recognizable as the real thing, but which promoted scoring, played down defensive duties, and refuted the virtues of a hard-fought 1-1 draw. …

“In the 1970s, Pele, Johan Cruyff, Eusebio, George Best, Gerd Mueller and Franz Beckenbauer all played in the same league. … It was a big money glamour league that aimed to entertain, while generating cash. In that respect, it was the Champions League and the English Premier League rolled into one.”

Plenderleith lays out a solid case for how the NASL was ahead of its time. FIFA may have fought the league’s attempts to tweak the rules, but later made changes that resemble some of those attempts. Publishing a wide range of game statistics, marketing to women, names on the back of jerseys -- that happened first in the NASL.

Clive Toye, the former New York Cosmos general manager, says, “We were constantly being visited by executives from English clubs to see what we were doing, asking why we were doing it.”

From all that the NASL got right to where it went astray, this colorful and important era of American soccer is in good hands with Plenderleith, a skillful writer and thorough journalist.

For those of us who lived through the NASL, "Rock 'n' Roll Soccer" brings back wonderful memories and enlightens us on aspects of the league we may not have realized. For those too young to remember the NASL, it’s a chance to comprehend how soccer took a foothold in the USA and meet the fascinating characters who made it happen -- with laugh-out-loud moments, to boot.

(Ian Plenderleith is a soccer writer and journalist who has been covering the game in the USA, Germany, Switzerland and his native UK for the past 25 years. His books include a collection of soccer fiction aimed at an adult audience, 'For Whom The Ball Rolls'. He has contributed columns, commentaries, player profiles, match reports, historical features and satirical news to numerous newspapers, magazines and websites, including The Wall Street Journal, The Guardian, When Saturday Comes and Soccer America.)