We're always looking abroad for insight and ideas on how to improve our player development. The Dutch have long been particularly popular. MLS sent its youth academy coaches to learn from the French. U.S. Club Soccer has partnered with Spain.

Many eyes are on the Germans, who won the World Cup after a revamp. Besides, our national team coach and Technical Director is a German. The Belgians too, are en vogue.

Even unsuccessful soccer countries can fill a hall of U.S. coaches. At the last NSCAA Convention, I watched American coaches flock to a lecture by a coach from Scotland, which hasn’t qualified for a World Cup since 1998, when it went winless.

Here’s an idea. Let’s check out what’s going on in Costa Rica, a nation whose population (4.5 million) is one fourth of the greater Los Angeles area.

Costa Rica, which beat the USA, 1-0, earlier this month, you’ll remember also had a more successful 2014 World Cup than the USA.

The Ticos were drawn with three former world champions, and won the group! Playing impressive soccer, they beat Uruguay (3-1) and Italy (2-0), and having clinched second-round passage, tied 0-0 with England. Costa Rica reached the quarterfinals, where it fell to the Netherlands in a penalty-kick shootout.

The current Costa Rica U-17s did something remarkable on Thursday at the U-17 World Cup, beating France in the round of 16, in a penalty kick tiebreaker after a scoreless tie. 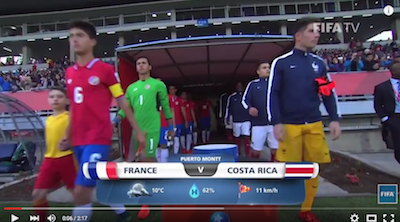 France was the only team to win all three of its group games, outscoring its three foes, 14-4. It entered the tournament as European champion, having beaten Germany, 4-1 in the final.

The U.S. Soccer Federation spent $14 million in the 2014-15 fiscal year on youth national teams and player development. I’ll bet you Costa Rica spends a fraction of that.

Speaking of U.S. regional rivals who seem to be doing something right at the youth level, Mexico reached the quarterfinals at the U-17 World Cup by beating host Chile, 4-1. (The Chileans had beaten the USA, 4-1, in group play.) 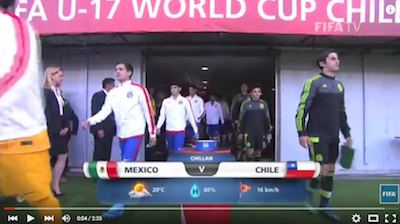 Mexico reached the second round with wins over Argentina (2-0) and Germany (2-1), and a scoreless tie with Australia.

U.S. U-20 women down a pair of Spanish clubs 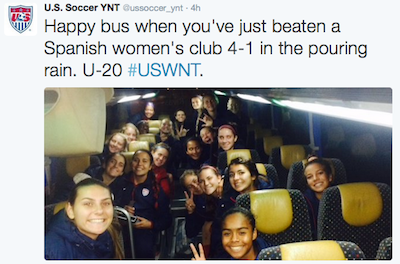 ... U.S. Soccer Development Academy players aren't allowed to play high school soccer, but the Chicago Tribune's Jon Kerr reports on three Chicago area players, including two already committed to colleges, who are leaving their Academy teams to play senior year high school ball. The article brings up the arguments from both sides of the high school vs. club battle over young talent. Says one of the players, "I need a break. I needed more freedom to express myself without all the pressure, and high school has helped me with that." A rewarding risk? Area players take a break from club soccer

... Fargo Soccer Club president Matt Noah says discrimination is behind North Dakota State University not allowing his teams to participate in a new youth tournament it is hosting. Noah says his club is about half the price of others, and has close to 1,000 players, many of them new Americans. "It's an unrestricted, open tournament, unsanctioned, they're supposed to let everybody in," says Noah. Fargo Soccer Club claims discrimination as NDSU bans them from tournament
u-17 world cup, u.s. under-17 men's national team, youth, youth boys, youth girls, youth soccer
26 comments about "Put Costa Rica high on the list of nations we might learn from".
Read more comments >
Next story loading