The New York Red Bulls showed why it entered the MLS playoffs with the league's best record, gaining a 1-0 win over D.C. United in the first leg of their Eastern Conference semifinal series. Dax McCarty scored the game's only goal on a header in the 72nd minute, but the Red Bulls would have won by more goals but for the work in goal by D.C. United's Bill Hamid.

1. Red Bulls' work pays off with another headed goal.

The Red Bulls are one of smallest teams in MLS. At 5-foot-9, McCarty isn't even the smallest player in the New York starting lineup. Bradley Wright-Phillips, Lloyd Sam and Sal Zizzo are all 5-foot-8. But the Red Bulls have a knack for scoring goals in the air.

McCarty's goal followed a free kick 24 yards out from Sacha Kljestan to the far post, where the New York captain was unmarked and scored with a header. It was the sixth goal New York has scored in the air on the road this season and was remarkably similar to a goal McCarty scored against Orlando City five weeks ago. 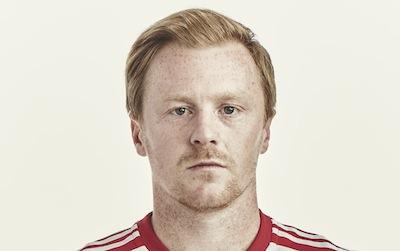 "There's a lot of little set plays that we build in," said Red Bulls coach Jesse Marsch. "The little movements to try and unsettle the team or try to keep them guessing. It's always kind of up to Sacha to be the quarterback of these different moments and decide what play we're going to use and when. It's not just that. It's a great ball in the box, which I thought he served a bunch of great balls all night, and then Dax does enough to gain a little bit of room and finish the goal, so good job from those two."

2. Bill Hamid is the best keeper in MLS.

The Red Bulls finished with an 18-9 edge in shots and could have built on their advantage heading into next Sunday's second leg at Red Bull Arena but for a couple of huge saves by Hamid. Mike Grella broke in free from the left side and fired a point-blank shot that Hamid parried with his face in the 33rd minute.

Thirteen minutes into the second half, Hamid made a diving stop on another shot by Grella, and then left back Kemar Lawrence smashed a shot off the near post before the Red Bulls got their breakthrough goal by McCarty with a shot on which Hamid had no chance.

Seattle's Stefan Frei and Vancouver's David Ousted also have strong cases for MLS Goalkeeper of the Year, but both have much better supporting casts. United needed a strong game from Hamid to have any chance against the Red Bulls. It failed to put a shot on target.
3. Perrinelle injury could be costly.

Red Bulls center back Damien Perrinelle had to be stretchered off early in the second half after he landed awkwardly on his left knee. Fellow Frenchman Ronaldo Kubar came on for Perrinelle but was lucky to remain in the game when he wiped out United midfielder Markus Halsti but was only issued a yellow card by referee Fotis Bazakos.

The concern for the Red Bulls will be that on review the MLS Disciplinary Committee might suspend Kubar for the second leg. On Sunday, United was without Bobby Boswell, who was issued a yellow card for kneeing New England's Juan Agudelo in the leg in their knockout match but suspended by the Disciplinary Committee for endangering Agudelo's safety.

As it is, both center backs -- Matt Miazga and Kubar -- will carry yellow cards into the second leg. Wright-Phillips was also issued a yellow card for time-wasting. Red Bulls fans will remember that BWP missed the second leg of the 2014 Eastern Conference finals against New England for being issued his second yellow card in the first leg -- for delaying the restart of play.

TRIVIA. New York earned its first playoff victory at D.C. United in seven meetings with the victory on Sunday. New York is 1-4-2 all-time at RFK Stadium in the postseason.