Raul scored the winner in the New York Cosmos’ 2-1 semifinal win over the Fort Lauderdale Strikers to advance to the NASL final against the Ottawa Fury FC, which got two goals from Tom Heinemann to down Minnesota United, 2-1, in overtime.

The Cosmos, title winners in 2013, will host the final, thanks to finishing first in the overall standings, Sunday (5 p.m. ET) at Hofstra University’s Shuart Stadium in Hempstead, N.Y. 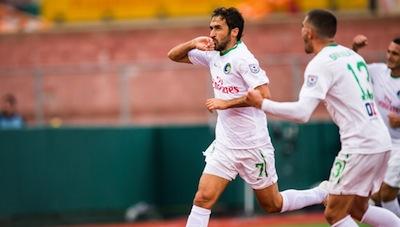 The Cosmos fell behind in the 16th minute when the Strikers’ Victor “PC” Giro beat goalkeeper Jimmy Maurer with a shot from the edge of the penalty area. But the Cosmos equalized before halftime when Strikers goalkeeper David Meves' punch of a 35-yard Marcos Senna free kick bounced off Gaston Cellerino and into the net.

“Raúl is always in the right place and has always been a player who brings some genius to the game,” Cosmos coach Giovanni Savarese said. “He was breaking down the defense, creating chances, and the last few minutes the way he was holding the ball was just amazing.

The 38-year-old Raul, who like fellow former Spain international Senna, 39, has announced his retirement at the end of the season, hit the winner in the 61st minute in front of a Cosmos home crowd of 5,061.

Ottawa, a second-year team that didn’t reach the playoffs last season, hosted Minnesota in front of an NASL postseason record crowd of 9,346.

The visitors took a 7th-minute league with a Christian Ramirez penalty kick. Heinemann equalized in the 47th minute and scored the winner in the 108th minute after settling a long pass from midfielder Mauro Eustaquio with his chest before stroking home with his left foot.

The Cosmos and Ottawa met three times in the regular season. They drew 0-0 in Ottawa and split when the Cosmos hosted – a 1-0 Cosmos win and a 4-1 Fury win Sept. 22.