The border tug of war: Mexico courting U.S. talent is a 'good sign'

In 1998, the Mexican government changed its laws to allow dual citizenship, thus enabling U.S.-born Mexican-Americans to obtain Mexican citizenship. The measure, combined with the rise of the U.S. game, spurred aggressive scouting of U.S. youth with Mexican heritage by the Mexican federation.

Now we have a tug-of-war between the two giant neighbors for young talent. Sebastian Saucedo, an 18-year-old born in California and raised in Utah, played for the U.S. U-20 national team in a Serbia-hosted tournament in September and is currently with Mexico’s U-20s in a training camp that will include friendlies against Canada. (Both nations are starting their cycle for the 2017 U-20 World Cup.)

Saucedo appeared in nine MLS games (one start) this season for Real Salt Lake. Also in camp with Mexico is goalkeeper Christian Herrera, who like Saucedo played for the USA at the Serbia tournament and hails from Real Salt Lake's academy.

Saucedo and Herrera do not endanger their U.S. eligibility by attending the Mexico camp. They are considering their options, like many players before them, some who have ended up back in the U.S. national team program and others who have not.

At the recent U-17 World Cup, where the USA exited in the first round, fourth-place Mexico’s squad included two USA products: starting goalkeeper Abraham Romero and outside back Edwin Lara.

Lara, a Northern Californian, was starting at outside back for the USA at the beginning of the last U-17 cycle before joining Mexican club Pachuca and the Mexican national team program. He was the youngest player, the only 16-year-old, on Mexico’s U-17 World Cup team and started in the 4-2 semifinal loss to eventual champion Nigeria. Romero started all of Mexico’s seven games.

Lara and Romero, according to FIFA regulations, could still returned to the U.S. national team program.

It may be frustrating for U.S. coaches, but it’s reasonable for young players to explore their opportunities. And when they do, it might just provide them with experience that could ultimately benefit the U.S. national team program.

Carlisle points out that the U.S. Soccer Federation's Development Academy is in its ninth season. MLS academies have set down roots and begun producing professionals. MLS clubs are fielding reserve teams in the USL. But there is a sense that while the level of the average player has gone up, fewer Claudio Reynas and Landon Donovans are being produced.

Sargent and Acosta shine at U.S. U-15 festival

During a 60-player gathering in Bradenton, Fla., of U-15 boys aiming to become part of the new cycle for the 2017 U-17 World Cup, Missouri product Josh Sargent scored five goals in three games.

Sargent, who plays for Scott Gallagher Missouri’s U-15/16 Development Academy team, played on the “Gold Cup” team that won the U.S. U-15 Festival with three wins. George Acosta, of Florida’s Weston FC, had two goals and three assists for Gold Cup. 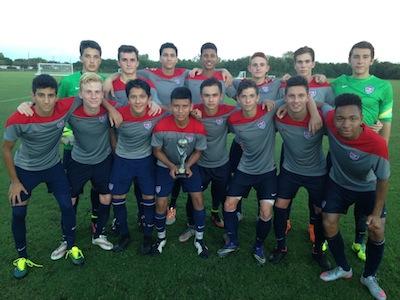 The BBC reports that the percentage of club-trained players in English Premier League squads has reached a new low. Research by the CIES Football Observatory found 11.7% of top-flight players graduated from their club's academy, down from 13.8% last year. Across 31 top European divisions the figure has dropped below 20% for the first time since figures began in 2009. A "club-trained player" is defined by spending at least three seasons between the ages of 15 and 21 training with his current club.