Cosmos send Raul and Senna out as NASL champs

For the second time in three seasons the New York Cosmos won the NASL title, beating the Ottawa Fury, 3-2. The win sent retiring Spanish stars Raul and Marcos Senna out as champions, but the hero was Argentine Gaston Cellerino, who scored a hat trick. 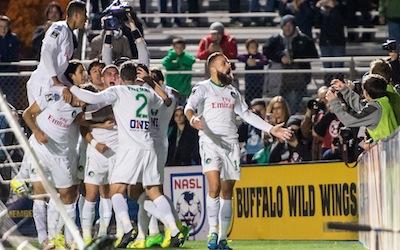 “I’m very happy," said Raul. "It was my last game in my career. I’m very proud for everything I did and thank you to the club, my teammates and the fans for this amazing year. For me now, I start a new life with another project. I’m happy, but I’m also very sad.”

Raul played one season with the Cosmos, who also won the NASL title in 2013 with a 1-0 win over the Atlanta Silverbacks on a goal by the Brazilian-born Senna.

“To win next to Raul was an ideal situation," said Senna. "I’m thankful for him being here throughout the year as he made the difference many times and scored many goals. In addition, today he didn’t get the goal, but he got the assist. He’s a player that is a game-changer.”

Raul set up Cellerino for the third goal in the 85th minute after the Argentine had scored to eighth and 72nd minutes. Cellerino's second goal came two minutes after Ottawa equalized on a goal by Tom Heinemann off a through ball from Andrew Wiedeman.

Ottawa played the last 22 minutes with 10 men after Mason Trafford was given a straight red card for a stomp on Sebastian Guenzatti. The Fury's second goal came in stoppage time on a Heinemann tap-in.

"I am incredibly proud of this group of men," said Ottawa coach Marc Dos Santos. "This is a team of champions. We played like champions tonight, but didn't get the result."

The game was also the last for Dos Santos with Ottawa. He will take a new coaching job in 2016.