Hall of Fame goalkeeper Tony Meola, whose previous coaching experience since retiring as a player in 2008 was at the youth level, is the new head coach of the NASL's Jacksonville Armada FC. 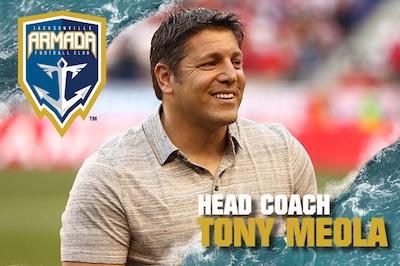 Meola, who started for the USA at the 1990 and 1994 World Cups and won a title with Kansas City during his decade-long MLS career, takes over a team that finished in last place of the 11-team NASL in 2015 with a 8-7-15 win-loss-tie record.

The Armada had fired head coach Guillermo Hoyos, his assistants, and general manager Dario Sala in September after a five-game scoreless run and a 13-game winless streak on the road.

“In speaking with Tony, it became clear he knows what it will take for our team to become an elite competitor in the NASL and U.S. Open Cup,” said Armada FC owner and CEO Mark Frisch in a press release. “His vision and approach to style of play align perfectly with mine. Tony is a great student of the game and has played at a very high level. He has played for great managers and will know how to get the best out of players.

Meola won an NCAA title with Virginia in 1989, the same year who took over as starting keeper for the USA, which he helped qualify for its first World Cup in 40 years. He started all seven games for the USA at the 1990 and 1994 World Cups and was a backup keeper at the 2002 World Cup. After leaving MLS in 2006 he played two seasons with Major Indoor Soccer League’s New Jersey Ironmen before retiring.

He also had stints as assistant coach with the U.S. U-15 boys national team and U-20 men’s national team. He coached youth ball, at Blue Valley SC, while playing with Kansas City, with which he was named MLS MVP during its 2000 championship season.

Eric Dade, who as interim head coach after Hoyos’ sacking guided the Armada to a 2-2-3 finish, will remain with the club as director of player development. Meola will also serve as technical director.

“It came at a time where I was ready to make this move, and I’m super excited to eventually get on the field with the team to see how we can take this to the next level,” Meola said. “All the research I did about Jacksonville pointed to this being the right move. It’s a first-class organization that does things the right way, and our plan is to continue to grow the club on several different levels.”