Sacramento wants to show it's ready to roll

While efforts by David Beckham's group to find land for a soccer stadium in Miami appear to have hit another hit roadblock, Sacramento's MLS bid got a boost as preliminary plans for a stadium in the California capital's downtown rail yards were released ahead of Tuesday's vote by city council on a term sheet outlining the timing and financing of the stadium project. The proposed MLS group will finance the $180 million cost of the stadium; the public's contribution (city, state and federal) to the work on the site was put at $46 million. 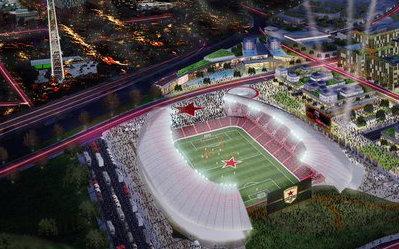 Unlike Miami, where MLS has said it will come if a suitable stadium is built, Sacramento has yet to receive the blessing of MLS on an expansion team. But Tuesday's vote is symbolic as approval would come just before MLS's board of governors meet next weekend at MLS Cup.

It has been reported that the board of governors meeting is the deadline for Miami Beckham United to get a publicly supported plan for a stadium. That would seem to be unlikely in the aftermath of the postponement of a vote by the Miami-Dade public school board on a partnership with Miami Beckham United, which has been unable to finalize the purchase of all the land it needs to build a stadium next to Marlins Park.

That site is the third Beckham's group has considered in a process that has now dragged on 21 months since MLS Commissioner Don Garber announced plans for MLS to move the downtown Miami.

Sacramento's plans call for the construction of a 25,000-seat stadium. Republic FC would be responsible for coming up with the private financing of the stadium and cover cost overruns as well as pay for design and predevelopment costs. It would reimburse Sacramento for security at stadium events.