Rutgers came back from missing its first two shots in the shootout to beat Virginia and advance to the Women's College Cup for the first time. The Scarlet Knights prevailed with a 7-6 advantage through nine rounds of penalty kicks after a scoreless draw. Cavaliers star Makenzy Doniak hit the crossbar in round five when she could have won it for Virginia. 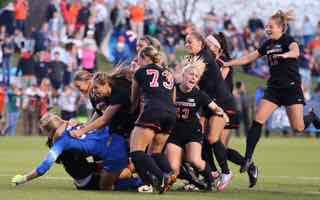 Rutgers held the heavily favored Cavaliers to nine shots in regulation, and three in overtime as goalkeeper Casey Murphy made two saves. The shutout by the Scarlet Knights was a school record 19th of the season.

Rutgers made its next seven kicks after missing the first two, including all four in the sudden death session of the penalty kick stage. In the ninth round, Murphy dove to stop Tina Iordanou’s penalty kick and clinch the win.

“It’s big," said Rutgers coach Mike O'Neill. "This is where we want to be. This is where we want the Rutgers women’s soccer program to be every year – we want to be competing for championships. I know that the goal of the team and the goal of the seniors when they came here is they wanted to make sure by the time they left that this program was one of the top five programs in the country. That’s the way they wanted to leave it and that’s the expectation and that’s where they are.”

Rutgers will play the winner of Saturday’s Penn State-West Virginia game in the semifinals. The College Cup semifinals are slated for Friday at 5 p.m. and 7:30 p.m. ET., while the championship match is set for Sunday, Dec. 6 at 12 p.m. ET, all at WakeMed Soccer Park in Cary, N.C. All matches will be televised on ESPNU.